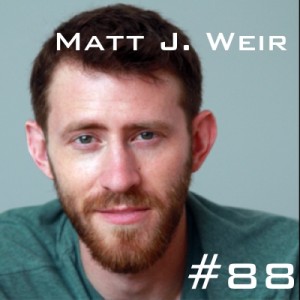 Longtime Magnet fixture and Creative Consultant for MTV's "Joking Off," MATT J. WEIR, talks with host Louis Kornfeld about working on television shows, finding his artistic voice, and his love of artfully dumb comedy. Matt and Louis spend the first part of this episode talking about Matt's recent experience writing scripts for "Joking Off" and how he's adapted to the more professional side of comedy. They also discuss Matt's infamous comedy duo, We're Matt Weir, and how Matt got into comedy in the first place. You can catch him hosting Cathouse at Industry City Distillery in Brooklyn each month, or right now, on this podcast!

Having just come off a stint writing scripts for MTV's "Joking Off," Louis asks Matt all about his experience working for a big network and a television host. He walks us through what it was to be the script supervisor and what the format of the show is, for those that haven't seen it. Matt was also writing jokes for the show's host, stand up DeRay Davis, and discusses what he's learned from writing for someone else's voice. He talks further about joke writing, what it's like in a writers room, and the professional side of comedy.

For years, Matt has been one of the hardest working people around the Magnet and Louis wants to know where that work ethic comes from. We hear about Matt's upbringing in Pennsylvania and how he never wants to go back to loading trucks. He also credits meeting Matt B. Weir as a pivotal moment in his comedy career and one that launched him into just making stuff. Together, as We're Matt Weir, they put up countless shows and traveled the country making artfully dumb comedy.  Matt debates making comedy like fine wine versus diarrhea water and describes how he used to fill 45 minutes on a Monday night at Magnet. Louis and Matt both agree that big, broad movies have their place in the theater and then they both make cool explosion sounds.

Having firmly settled in the camp of diarrhea water, Matt discusses being true to his vision and artistic voice. He then provides us with some background on how he began his quest in film and entertainment which started as a minor interest while in school. Over time, he learned how to shoot and edit by working at his schools media center and discovered that his calling wasn't to be a history teacher. So, Louis asks, whats next for Matt's career? What does he want to do? Find out all that and more by tuning in!