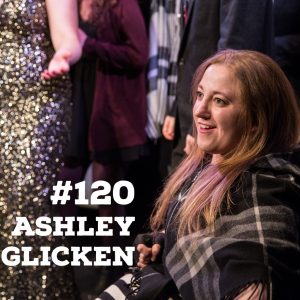 Chicago defector, ASHLEY GLICKEN, joins host Louis Kornfeld us to discuss improv, how attempts at "diversity" often exclude disabled people, and why accessibility and representation matter so very much. Ashley has been improvising since she was sixteen years old and has a wealth of insight to share from her own life experience, so get on board as she drops some serious knowledge. Huzzah!

Louis begins this episode with one of the hardest-hitting questions of all time: Chicago or New York City? A native of the Chicago suburbs now living in NYC, Ashley must make a choice! Wisely, she walks us through the pros and cons of the two great cities before telling us why she eventually escaped from Chicago. Ashley has been improvising since she was sixteen and returned to the Windy City after college to go through Second City's Conservatory Program. Upon graduation from the Conservatory, Ashley felt that she was limited by the lack of accessibility found amongst Chicago's various improv stages and soon stopped improvising. Ashley was drawn to NYC by its visual art scene and, lucky for us, she eventually found herself at Magnet. Though she was nervous to begin her first class after some time away from improv, she had the good fortune to study with instructor Nick Kanellis, big sib Hannah Chase, and a class full of wonderful fellow students.

Ashley talks about the fact that attempts at diversity often do not include disabled people and what the root causes of that problem might be. She also dives into the pressure she feels to educate the greater public and how the world needs adapt so that it can better serve not only disabled people but, indeed, everyone. She and Louis also talk about why representation matters so very much and how every time Ashley is on stage, she feels that she's there, in part, for the disabled community.

There's a bunch of other great stuff in this episode as well. Louis and Ashley discuss how great it feels to be in on the joke, allowing people to laugh with you rather than laugh at you, as well as the pain that comes with being laughed at. They talk about the limitless realm of possibility that improv allows us to command and they discuss how we adapt and get stronger by forcing ourselves to look at all parts of life, not merely the familiar bits, but those which make us uncomfortable as well. Finally, a Very Serious Scene Opposite A Jar Of Pickles.