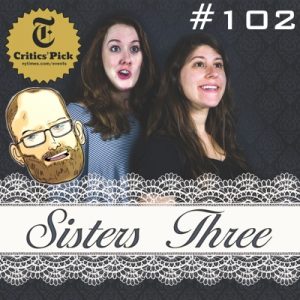 The creative team behind SISTERS THREE joins us to talk about their incredible show. Starring Magnet all-stars Elana Fishbein and Elena Skopetos, directed by the one and only Peter McNerney, and written by all three of them, Sisters Three is a fast-paced, hilarious play that is running at the Magnet this fall and early next year. It's Louis' favorite show he's ever seen at the Magnet and it's also a New York Times Critics Pick. Your next chances to see it are Friday November 11th and 18th but you get to hear all about the show right here first.

They get started with attempting to describe Sisters Three and Louis claims that it's the perfect marriage of improv and theater. The creators dive into the process of building, writing, and staging the show through improvisation and workshopping pieces of it. They say it took at least six months of work to even have an idea of what the show would look like!  It's an incredibly interesting and wonderful process. They discuss embracing subtlety and avoiding the temptation to spell it all out for the audience. They talk about characters left on the cutting room floor and some of the jokes that didn't make it in. Louis floods the episode with compliments and they're all warranted. He also asks, "What's the next step?" They talk about promoting and producing the play and where else they might be able to take it. Also, they give a nice hat tip to Locke & Key, a graphic novel series which has inspired them all. PLUS - They ALL do a Serious Scene Opposite A Jar of Pickles. (And no, it wasn't Evan's idea!) Huzzah!