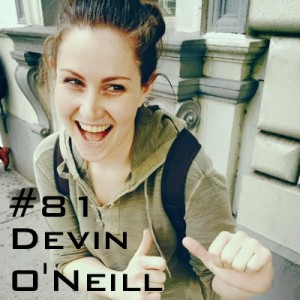 Get ready, because heartthrob DEVIN O'NEILL joins us to talk about her lifelong pursuit of comedy, performing for children, and how following your feet is the best! From The Cast to Sketch Teams to Megawatt and INSPIRADO, hear about Devin's many comedic ventures and how she most prefers to approach scenework. Plus, a cameo from Ed Herbstman and Louis being an old man!

Louis begins this episode pointing out how nervous Devin seems to be. What's she got to be nervous about? It's just a podcast! All kidding aside, she quickly masters her fear in time for Louis to ask her about her favorite quote: Dont cry because its over, smile because it happened. On her way to discussing imaginary friends, Devin manages to insult Louis' age and it's good fun for all. Laughing off his obviously hurt feelings, Louis wants to talk about Florida, which is where Devin is from originally. She tells us of this odd and, at times, amazing state and then claims that shes wanted to be a performer and comedian since she was three year old! Wow. And the best part? Its true!

Devin has been performing for as long as she can remember and, in adulthood, spent time acting in a children's theater company which toured throughout Florida. All this before she moved to NYC to do improv and create funny characters. She got into improv thanks to her friend and Magnet House Manager, Bimini Lee Wright, after watching a UCB class show and then seeing *Kiss Punch Poem*. Sorry, 101 class, but Devin ended up taking classes at Magnet. Circling back to childrens theater, Devin and Louis discuss why playing for children is both incredibly difficult and totally amazing. They answer the question we ask in retrospect: How does an improv audience compare to a room full of unabashedly honest children? Plus, Louis provides a theory as to why improv is populated by such a bunch of smarties.

Back to the present, yes? Devin came to New York to to pursue comedy, something which stemmed from her work in Commedia dell'Arte. She tells of about all the different shows she does, plus(!), she's got a full-time job. Needless-to-say, she has a lot to balance day-to-day and being on stage allows her a central focus compared to the scatterbrain nature of daily life. She and Louis ponder advice for enjoying second beats and talk about innovative thinking versus adaptive thinking, or initiating versus responding, if you prefer. She advocates adding a feeling of inclusiveness to how you begin a scene, no matter what kind of initiation you provide, and as promised in the lead, they talk about their feet knowing better than their minds!

To wrap things up, Louis and Devin wax poetic on The Cast, which for the record, Louis thinks is better than 98 Degrees. Devin tells us how crazy fun the show is and gives a lot of well-deserved credit to their director, Hannah Chase. Plus, Ed Herbstman makes a cameo and Devin talks about being friends with the one and only Justin Torres!!