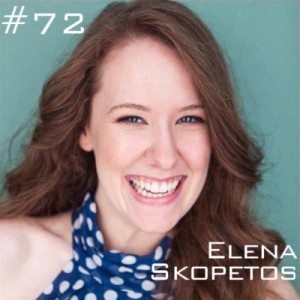 Champion of sketch and improv comedy alike, ELENA SKOPETOS, joins us on the show to talk about clowning, characters, ComedySportz, and the new J&L Presents! You know her from The Cast, The Executives, AVALANCHE, and her many appearances in other shows, but this is Elena's first tell-all-interview-podcast with Louis Kornfeld so we suggest you strap on in before you're swept away to Flavortown. This party is starting and you're still at the door, buddy!

If you think Louis is messing around to begin this episode, you're dead wrong. He immediately questions Elena about her experience studying abroad in Italy and leanring commedia dell'arte. Sadly for Pantalone and Arlecchino, commedia has never been very high on Louis' list. He's able to put his disdain aside though for the sake of this podcast as he discusses stock characters with Elena, in which they describe the practice of exaggerating familiar archetypes and the fun which can be had with specificity. How does Elena bring herself and her theater training to sketch comedy? Though she began seriously acting in college at Marymount Manhattan, she really started out as a performer singing in elementary school. Despite her education, she says, she really found herself in the comedy world.

Louis asks Elena what she does to prepare for a show and she also describes the experience of taking in the audience as it differs between sketch shows and the theater world. She and Louis both discuss dealing with emotional preparedness and self-confidence in performance. Then Louis spits vitriol on mirror games and, this is mysterious, claims that 80% is good enough sometimes.

Lately, Elena has been working on playing closer to herself rather than the diverse cast of characters she has commonly leaned toward. Louis talks about wanting attention but then disliking the feeling of being focused on. How does one create interesting characters with out stray too far from the self? Specificity over crazy! Getting into scripted work, Elena talks about the comedic logic behind making the funniest choice rather than simply a funny choice.  She tells us about bombing with a character and recounts a time when she thought everyone was being overly dramatic. Our two heroes examine the use of darker material and assigning inauthentic importance to melodramatic subject matter.

And did you know that Elena is a comedy machine? She does so much! Louis inquires about her experience doing ComedySportz, and they consider the benefits of doing short form, what one can take from that into long form, and what is something that long form improvisers are guilty for! He then asks her about taking over hosting duties, along with Ari Miller, of Magnet's character showcase, Jana & Lauren Presents. They also discuss Elena's Megawatt team, AVALANCHE, and finding a comfort with a team or group. And finally, Louis and Elena talk about The Cast (which is taking off!) and what is so special about the show and team that make it so great.