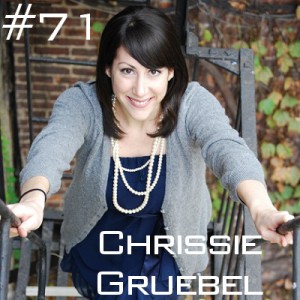 We couldn't get enough of CHRISSIE GRUEBEL on stage, so we had her on the podcast to talk about improv, acting, & everything else. A darling of Megawatt's Metal Boy, Friday Night Sh*w, and Magnet Sketch Teams, Chrissie sits down with Louis and regales him with tales from Philadelphia, New York, and the theater capitol of North America, Scranton. Chrissie is one of our favs and we just know you're gonna love this episode. May she live forever online!

To begin this episode, Louis claims he knows nothing about Chrissie and Chrissie claims she doesnt have a Long Island accent. You'll have to tune in to find out that both of these are lies! Though she may hail from Long Island, Chrissie went to school in Scranton and lived in Philadelphia for a number of years. Once in school, she found she wanted to be an actor and thus enrolled in Scranton's theater department, which took a multidisciplinary approach to theater education. She talks about the all hands on deck experience of her program and how it made everyone more invested in the productions they mounted.

Chrissie moved back "home" to New York City after a rough break up and started taking classes at UCB in late 2009 because of a very expressive Facebook friend and because most of us are just trying to fill a void, right? CG Fun Fact: She did her first show before she was even done with 101 and it was at UCB Chelsea at 11pm, right after Harold Night! Despite (or because of?) this experience, Chrissie says it took her until the end of 301 to actually enjoy improvising. Coming that that slow introduction to being so invested in improv now, Louis wants to know what Chrissie finds exciting these days. For her, it's a team's energy that matters most. With a nod to legendary Harold team, Sandino, she talks about working with teams that always support you, team chemistry, and trust amongst ensembles. Louis believes that there is an addiction to beating yourself up after shows, which is probably why it's so important to celebrate each other and keep the energy positive.

Louis digs into how and why Metal Boy is one of the great teams to grace the Megawatt stage. He also commends Chrissie for being able to call bullcrap in scenes which might offend her real world views, and being able to do so in a way that only makes the show more enjoyable. Whats her secret? She says that part of it is getting to a point where youre comfortable enough with your improv that you dont feel thrown by bringing yourself into it. Speaking of things that matter to people, Louis launches them into a discussion about gender roles in the improv community. How are we doing right now? In answering, Chrissie talks about the makeup of her indie team, Mannequin Room, as something that helped her grow as an improviser. She also explores how we might be able to cut these issues of inclusion off at the pass rather than simply react to them. They get into talking about sophomoric humor, what it takes to be "funny," and Louis says something that he will continue to say until the day he dies. Let's hope that never happens! All hail Louis, The Immortal.