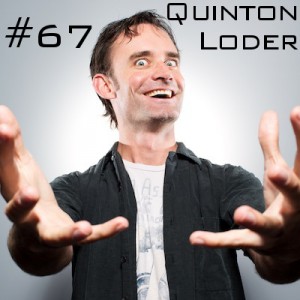 Longtime performer and jack-of-all-trades, QUINTON LODER, joins his good friend Louis Kornfeld to talk about Topeka, The Boss, and being an improv hand-grenade. Not only does Quinton perform weekly with The Boss, but we is quite literally in charge of many of the Magnet's day-to-day operations. Pretty cool, right? From Kansas to Chelsea, Quinton tells us about his improv life.

Quinton sets this episode off to a rollicking start with a tale about a sleepy pub and how he spent one night alone in Scotland. Having recently returned from Ireland, Louis finds himself enthralled with Irish pub culture, which was previously unknown to him. We get to hear about the difference between sheep and dairy farmers and Quinton calls out our producer Evan for looking at porn while taping [true? untrue? you decide!]. Louis' recent Celtic adventure has these two old friends talking about winters is different cities and whether or not Louis will make a lifelong commitment to NYC.

Backing up a ways, Louis asks Quinton about his collegiate experiences in competitive theater and we learn the [totally valid] reasons why Quinton doesn't much care for Shakespeare. In addition to his work at school, Quinton talks about his time spent working in Topeka, Kansas at Topeka Civic Theatre - the oldest continuously operating dinner theater west of the Mississippi. Louis recalls his visit there and how impressive he found it to be. Hear about how Quinton first got into theater on a dare and why he went to a law school to become an actor.

After doing improv and straight acting for years in Topeka, Quinton eventually decided to check out New York City, taking classes at SecondCity (NYC!), UCB, and then Magnet. He apologizes for ruining Second City NYC and talks about his first group in New York.

Don't fret, fans of The Boss  Louis and Quinton discuss their stalwart team's independent shows, the incredible acting of teammate Dan Fairall, and how they deal with bombing. They tell of their heartbreaking trip to New Orleans and we hear what might be the the funniest moment on the podcast. Want more? Find out how The Boss was named!

You get alll of the above, plus! Louis is surprised that Quinton was ever unpopular. Why is Quinton the team hand-grenade? And finally, Louis proclaims podcasts are dead. [For real.]