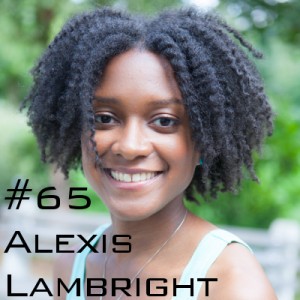 Magnet All-Star performer, ALEXIS LAMBRIGHT, chats with us about The Wrath's 4-year anniversary, representation in improv, and her various hilarious scripted shows. You can see Alexis all around the Magnet performing with The Wrath on Megawatt, with The Cast on Saturday nights, as host of The Griot Show, as a member of The Stank, and with Rebecca Robles as the soul-singing duo Cocoa Dreamz. This week, she sits down with host Louis Kornfeld to talk about all manner of things related to comedy and we're excited to have her as a guest!

With The Wraths 4-year anniversary having just passed, Louis inquires as to what makes The Wrath work so well  why is this team so amazing? Alexis talks about the team's dynamics and the importance of having her ideas justified and embraced right away. Louis says that he often references Alexis as an example of someone who plays with their own style yet is never hindered by it. Pretty cool, right?

Stemming from their discussion on The Wrath, Louis and Alexis talk about the pressure she feels to represent not only woman, but also people of color, when she's performing. This leads into a discussion on diversity in improv, Rita Chins recent essay, and some of the things Alexis came to expect as she began improv classes. She stresses the importance of having all voices be heard (and accepted) and answers the question, "Do you work on your own stuff or do you keep trying to fit in [to the theater system]?"

Alexis began taking class at Magnet in late 2008 and she tells us about what brought her to improv in the first place. Her first formal improv training was a weekend-long Second City workshop which she took after being inspired by watching SNL. Louis talks about new students ability to convert fear into power and asks Alexis how The Wrath has managed to keep the romance alive after 4 years. Hear about how they've spiced it up recently and what Alexis has to say about their foray into musical improv!

Going further back, Louis talks to Alexis about her family, moving around as a child, and where she feels most at home. He also asks about her friendship and artistic relationship with Rebecca Robles. As Alexis puts it  theyre like the Odd Couple. Although they maybe have different energies, they have very similar work styles. She talks about their act Cocoa Dreamz, which is a Motown-era singing duo, and how that show allows her to channel her mother and aunts. On an unrelated note, Louis talks about finding inspiration in sad people and taking what you dont like about someone and choosing to make it what you love about them.

Finally, they wrap up the episode discussing Alexis' one-woman-show, The Alexis Lambright Tell-A-Thon: Combating Adult Virginity, which has enjoyed runs at Magnet, NY Fringe, and Hollywood Fringe. They talk about the origins of the show and the writing of it, as well as the attention it received as a result of an NY Post article, which wasn't without its compromises. Louis opines that coping with scary things allows you to move forward and become who you are. We think he's probably right.

Enjoy this episode. It's great listening.