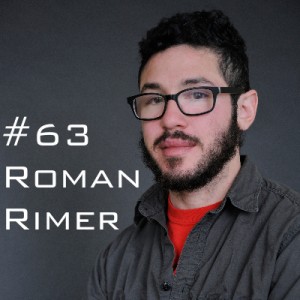 Comedian and activist, ROMAN RIMER, visits us from San Francisco to talk about using comedy to punch up, learning from personal confrontation, and the development of our cities. This is an episode unlike any we've had thus far, dealing with matters of social tolerance, capitalism, and human nature. It's a thought-provoking episode and we're thrilled to have Roman as a guest!

A one-time Magnet student and performer, Roman now lives in the Bay Area. Louis is quick to point out that, perhaps more than anyone he knows, Roman truly straddles the line between comedy and activism. As he puts it, he is always looking to use comedy to "punch upward." Amongst the causes he champions, Roman is particularly interested in combating police brutality, prison abolition, and cannabis legalization. Roman talks a bit about growing up in the Bay Area and Chicago and how, as a child of the 1980's he feels as though the media and authority figures of that time were very much interested in scaring people into conforming, especially children. Louis leads them into talking about the us vs them mentality which is so prevalent in our society.

Roman studied Theater and Psychology in college and eventually made his way to NYC, where he was immediately confronted with the challenge of being an artist in a capitalistic society where funding was difficult to come by. We hear a bit about how Roman got his start in the arts and Louis deconstructs our "top dog" nature. He then asks Roman about traveling all around the country doing his solo shows, which have always been heavily autobiographical. Given that Roman shares such personal details through his shows, Louis wonders what it's like to be so intimate with strangers in strange places. Has he encountered a lot of people he doesnt see eye-to-eye with? Roman describes a performance where he was confronted by an audience member and how both men have grown from the experience. Louis wonders, are we as a species getting closer as time goes on, or is the gulf widening? Louis likens improv training to Professor X educating the X-Men as a force for good, which is a beautiful thing to think about.

Where is Roman's art these days? He tells us about his podcast called The Weekly Review on Mutiny Radio out of San Francisco, which deals with current events and activism. Speaking of - whats going on in San Francisco right now? It sounds horrible, right? At least, that's Louis' take. They discuss the development of San Francisco and the changes that have been occurring in NYC as well. Finally, Louis asks Roman how the improv scene can address the issue of diversity? What resource does Roman want you to check out? Find out all that and more.

One this is extraordinarily clear from this episode, Roman Rimer is making a dedicated effort to change the world around him and it's damn impressive.