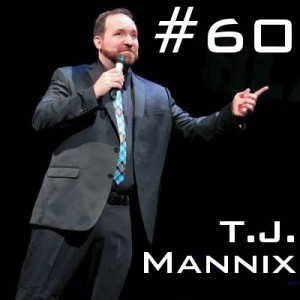 Musical improviser, gifted actor, and flat-out handsome man, T.J. MANNIX stops by the podcast to talk about pursuing his dreams in NYC, the craft of acting, and the upcoming New York Musical Improv Festival [NYMIF]. This is our 60th episode and we're excited to share it with one of Magnet's beloved instructors and long-time performers. T.J and host, Louis Kornfeld, discuss T.J.'s wide range of experience as an entertainer, everything from DJing for college radio to getting the right take on Law & Order, and of course, Louis opines on NYC's romantic appeal. Give it a listen, kiddos!

Hear about T.J.'s time spent as a middle-of-the-night college radio DJ and about how Louis didnt start listening to music until college. Find out what Louis first two cassette tapes were and what songs kept T.J. connected to English while studying abroad in Germany. Plus, Louis talks about his years in "local local broadcasting" on Staten Island.

T.J. moved to NYC in 1997 from North Carolina, where he had lived for a few years. He was working for Blockbuster Video and acting on the side, but was finally convinced by visiting actors from New York to give his dream a shot. He subsequently moved to NYC and got a job at the Jekyll & Hyde Club, which he explains was a very different place when he worked there. He talks all about all the fun the staff had and what it was like having it as his first gig in New York. Louis gives his thoughts on surveys, which we know you want to hear.

It's been about 10 or 11 years now that T.J. has been a performer without a "day job," so Louis wants to know, "What is it like to be a working actor?" Amongst the advice T.J. bestows, he says youve got to "9-to-5 it" because youre the CEO of your own company. He gets into the life of a working actor and he and Louis end up disucussing NYC neighborhood culture. Next, Louis wants to know, "Whats the strangest job you've had in recent memory?" You'll get to hear all about that, but [spoiler alert] it wasnt playing Santa Claus at Radio City Music Hall, but he talks about that fun experience as well, even giving away some Rockettes stage secrets.

Without a doubt, T.J. loves the process of acting. He talks about learning on your feet as an actor and tells of his experience working on Law & Order: SVU. He embraces and cherishes the challenge of just about any acting job and recognizes both the strengths and weaknesses in different kinds of actor training. He and Louis talk about small moments on stage and dealing with auditions. Plus, T.J. gives a great tip for playing villains.

Finally, the episode concludes with a discussion of the upcoming 7th Annual NYMIF, Oct 15-18 at Magnet Theater. Working with co-producers Robin Rothman and Michael Lutton, the festival is in its 7th year and has 215 performers coming to the stage. T.J. talks about what the festival has meant to the musical improv community and he shouts out some returning favorites that hes looking forward to seeing!