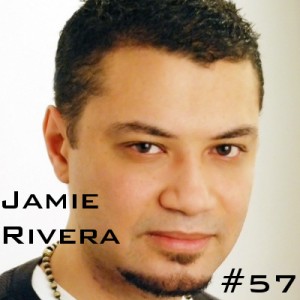 Back from our one-week summer vacation, we have longtime Magnet performer JAMIE RIVERA on the show us to talk about science fiction, having fun on stage, and how improv can help us through difficult times. Along the way, host Louis Kornfeld talks to Jamie about playing characters, performing for various audiences, and The Little Rascals. We love Jamie and were sure that youll love this episode.

To start things off, Louis asks Jamie about his interest in science fiction, which is something he inherited from his father. Jamie shares a funny story about going to see Star Wars for the first time as a kid, which gets Louis talking about how children make curious assumptions. Jamie claims that Inside Out might be Pixars best film and admits that it had him crying. What a softy! This gets the two of them discussing the power of film to move us, even if its not very good. Also, Louis loves Teen Wolf.

Continuing with this train of thought, Louis suggests that television and film allow us to give structure and resonance to our lives by framing them as narratives. Jamie relates this to religion, saying that even though hes not a religious guy, there does seem to be a guiding force that many of us seek out. People similarly interpret dreams to have meaning, when perhaps there is none. All of this is done in an effort to give more meaning to our lives, he says.

Admitting that tropes from popular media often creep into improv shows, Louis asks Jamie how he feels about stealing moves from tv and film while improvising. Jamie wants everyone to know that he has ditched his gremlin on the airplane wing move and also, that engaging in tropes feels like pretending they way you pretended as a kid. As expected, Louis sometimes thinks hes McNulty from The Wire and the two talk about archetypes versus specific characters. Louis wants to know: Is playing characters something that increases or decreases with age? He also talks about Shakespeare. Big episode for Louis.

Onto the topic of improv, Jamie and Louis talk about how Junior Varsity is a team that really indulges in having fun with each other and we get to hear a bit about how they approach their shows. Known as a fast-playing team, Jamie chalks much of their speed up to something akin to muscle memory  a result of being together for eight years. Their longevity has also created a great deal of trust amongst the members, which Louis thinks is the hallmark of a really good team.

After a bit about how to access your subconscious, Louis talks about showering. Really! This gets them chatting about entertaining yourself as a child. Jamie was a quasi-only child, and a latchkey kid, so he didnt have a lot of friends very early in childhood. Jamie would simply make stuff up on his own and Louis notes how often children ostensibly put on shows for no audience. The theme of childhood carries through to a description of The Little Rascals as a proxy for the improv community and Louis tries to figure out when he stopped being mortified by being on stage.

Along with JV and The Friday Night Sh*w, Jamie has also been a part of UCB Harold Night and the Second City Cruise Lines. So, Louis wants to know: How do all the different audiences influence being on stage? Jamie breaks down his time at UCB with Trillion, noting a high level of of pressure, and talks about how muggle audiences dont see the same connections as other improvisers do. He even shares one particular experience on the cruise ship where his heart was melted by a very special audience member.

Jamie continues the heartfelt sentiment saying that hopefully, even if we are doing fart jokes, we are exploring the human condition. What hes really getting at is comedys ability to have meaning, even in its silliest moments. Jamie concludes this episode for us by speaking candidly about death and how improv has helped him through tragedy.