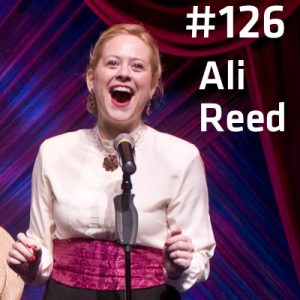 Musical improv maestro, ALI REED, joins host Louis Kornfeld on another episode of the Magnet Theater Podcast. The conversation hits a variety of topics including living in Kentucky, comparing sports to performing improv, and the pleasures of working with musical director Frank Spitznagel. We find out how Ali is able to balance her schedule as one of the busiest people in musical improv and learn about her ambitious plans for the future of the artform! Huzzah!

Catching us up on her life, Ali tells us that she has had a packed schedule for the past nine months and Louis refers to her as the busiest person in musical improv. They discuss momentum and how it can be helpful to have a full schedule.

In the beginning of the episode, Louis asks Ali about growing up in Kentucky. Doing her civic duty, Ali defines what bourbon is  explaining that if its not from Kentucky, its not bourbon  and we learn about the importance of Louisville basketball and how it was difficult for Ali to be a fan of their rival, University of Kentucky, while she was surrounded by Cardinal fans throughout college.

On the topic of sports, Ali compares being an athlete to being a performer and Louis imagines that playing sports would be similar to performing improv. Ali agrees but thinks that the subjectivity of performing makes it such that shes harder on herself  adding that its easier when there is a win or a loss.

Ali and Louis take a trip down memory lane to talk about how Ali came to be the hardest working woman in musical improv. On the suggestion from an ex-boyfriend, who had had been taking UCB classes in LA, Ali went online to see if any classes were available. She saw that an improv 101 class has just started registering that night and signed up immediately. She and Louis discuss the solidarity of improv classes and Ali says that she is still friends with everyone from her improv 101 class!

Eventually, Ali found her way to musical improv. A friend of hers said that he was going to do a musical improv class at Magnet to which she replied, Oh, hell yeah. Since then, she has been bitten by the Magnet bug. Sharing her love with us, Ali teaches Louis about different strategies in musical improv. Louis compares it to regular improv and Ali discusses how performing musical improv is similar to putting on that album that you like while youre in a certain mood  but its much more intense.

They talk about Magnet musical director Frank Spitznagel and his incredible knowledge of music, always able to seamlessly integrate various types of musical elements brought up by suggestions of a genre, television shows, specific musicals, etc. Ali talks about how lucky she feels to have had Frank as a teacher and to share the stage with him.

They explore the bravery that goes into musical improv and how Ali often forgets that it IS brave. She is reminded by it when people come up and tell her Oh, I could never do that.  They also talk about the benefits of being located in New York, in comparison to LA or Chicago, because of all of the Broadway folks who are willing to coming sing and perform in musical improv.

Diving further into the artform, Ali wants there to be a more authentic, truthful place for musical improv  instead of just songs about butts (which she also loves). When she teaches, she finds that taking the mundane scenes and heightening them can become the funniest and most touching songs. Louis concurs and mentions a musical improv show he saw that capitalized on those tiny slice of life scenes and ended up enhancing the characters emotions.

As the episode comes to an end, we learn about Alis dream for the future of musical improv. She lets us in on her ambitious plans  stating that she will build her own musical improv empire in New York City.