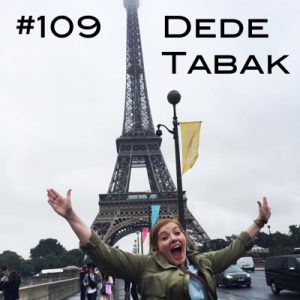 Ariana Grande's resident Floridian, DEDE TABAK, joins host Louis Kornfeld to talk about being from Miami, her college improv experience, and how to surprise yourself on stage. That's just a sample of what this episode has to offer, though. You'll also get to hear about celebrities, how to handle disgusting scenes on stage, how Dede got her start in the arts, and why strange scene partners are awesome. More too, but you get the idea! Huzzah!

This episode begins with a rare and lengthy cold open and continues in earnest on the subject of celebrity encounters. "How tall is Jemaine Clement?" you may wonder. Well, Dede Tabak has the answer! Louis asks Dede about her comedy roots and what she was into as a child. Dede grew up in Miami, Florida watching In Living Color, presumably because she didn't live in the part of Miami where people were partying or going to the beach, or maybe it was because she was a child! Louis and Dede exchange methods on running away from home, something they would both occasionally attempt in their youth and Dede shares the story of her parents meeting at NYU and moving from New York to Miami and, how now, Dede works at NYU where it all began. They talk about the burden of asking friends and family to come see your improv shows and how to perform gross things on stage, or when to just avoid them.

Backing up, Louis asks Dede what brought her to improv in the first place, and we discover that she began life as a theatrical kid and attended a University of Miami theater camp growing up. She then talks about her college improv days at Fairfield University, where she had a very positive experience under the guidance of Heather Parady, complete with lessons like cut the bullcrap, be truthful, and to occasionally burn some sage. Dede and Louis explore what it means to be truthful in a scene and how to step out with nothing in mind. Find out how Dede most loves to play and hear her talk about how she (successfully) surprises herself on a regular basis. They also discuss regret in improv, what Dede likes to get from her scene partners, watching improv after-the-fact, and cherishing the strange classmates and scene partners you'll have along the way. Dede says "vagina" in this episode more than anyone ever has on the show! Plus, A Serious Scene Opposite A Jar Of Pickles!