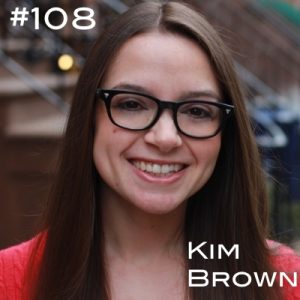 Youthful cast member, KIM BROWN, joins us to talk about training at multiple theaters, Gilmore Girls, the post-election Megawatt experience, and much much more. Hear about her Megawatt team YOUTHS as well as what it's like to put on a show with The Cast.  She dishes about everything from hot celebrity gossip t0 her indie team Free Kittens, so you can rest assured that this episode explores the full breadth of humanity. Listen up!

Welcome to 2017! The Magnet Theater Podcast is back for another year of interviews and, this week, we have Kim Brown on the mic. Kim and Louis begin this episode discussing her writing gig at a popular website dedicated to celebrity editorials and hot hot goss. As he often does, Louis asks our guest how she got herself into acting and comedy. Kim's origin story eventually lands her at UCB and with her beloved indie team, Free Kittens. We hear all about that, plus, she and Louis share some hot takes on which days of the week are best for taking classes!

After several years at UCB, and following a short break from improv, Kim began classes again at Magnet and had an amazing experience going through a second program. She details what its like to come back to take improv classes at another theater and why it was such a joy. Kim joined The Cast just after completing Team Performance Workshop and speaks here about how everyone on the team brings their own expertise to the show each week. Speaking of expertise, Louis and Kim get to talking about Gilmore Girls! As a Gilmore Girls expert on The Cast, Kim has much to say and Louis, who is only about three seasons in, also weighs in. This dive into the lore of Stars Hollow raises the topic of recreating something you really love and prompts a discussion on The Cast's weekly process of paying tribute to a particular genre or theme.

If you've ever wondered, "Will Kim Brown ever take a musical improv class?" we have the answer! We find out what scares Kim about musical improv and her former love, musical theater. Kim talks to Louis about performing at Megawatt the night after the 2016 election and they wax poetic about comedy's ability to help us during dark times. Louis asks about Kim's Megawatt team YOUTHS and they have a rousing discussion about reframing the Harold to make it more fun and how gaining a bit of confidence can make you so much better improv. The episode concludes with a round of Getting To Know Each Other and a once-in-a-lifetime epilogue from Louis Kornfeld. Check it out!