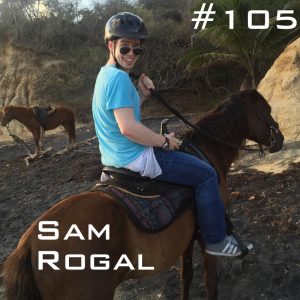 Boy made of metal and Friday Night favorite, SAM ROGAL, stops in to discuss performing arts camp, team chemistry, and his lifelong comedy partner, Pat May. Sam was hooked on comedy at a young age and made it a goal of his to get to NYC where (surprise!) he finally made it and has since performed on Megawatt, the Friday Night Sh*w, with Story Pirates, and countless other stages and shows in this great city. He shares all kinds of wonderful secrets in this episode and you're just going to eat it up!

We begin this episode with Sam talking about his years spent attending Buck's Rock Performing and Creative Arts Camp and how it changed his life. He talks about the training he received there and makes sure to drop a bunch of names. Sam recalls trying to impress counselor Becky Drysdale (Baskets, Key & Peele) as a CIT and how excellent she was to watch and work with. Louis and Sam talk about teenagers improvising, both from the perspective of being a teenager and what it's like as an adult looking back. They also discuss Pat Mays certain something. It's impossible to describe, but they try. Sam tells us about getting hooked on comedy as a teenager and how the idea of moving to NYC stuck with him into adulthood.

Talking improv, Sam relates that he often smiles or laughs in shows (and gets noted on it) because hes having such a great time. He thinks theres room for really enjoying yourself, even while working on commitment. Of course, we gotta talk about Metal Boy  Sams #1 Megawatt team. He describes what its like to find your team after being cut from others and he just has to mention his best boy Pat May again. He posits that an improv team is like a basketball team and preaches the virtues of simplifying scenes before making them insane. He and Louis also discuss how to keep a team consistent as it also evolves. Part of what helps make that evolution possible is talking openly and honestly with your team, which is also good advice for romantic partners. Speaking of, Louis asks Sam to talk about Elena Skopetos, his girlfriend, and well, you've just gotta listen. Its adorable. Finally, Sam and Louis discuss the improv communitys evolving approach on how it deals with sensitive topics.