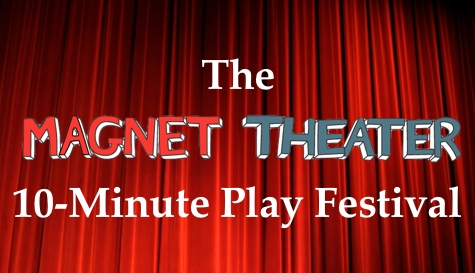 Calling all playwrights and actors and anyone who has ever wanted to try playwriting and acting! Magnet Theater is proud to announce that in 2017, it will host its first 10-Minute Play Festival. The 10-Minute play is a distinctly American artform all about heart and words and barebones theater  concepts that have always had a home at the Magnet Theater.

Starting in January 2017, we will be calling for submissions of original, 10-minute comedic plays  so get cracking! Are you a sketch writer looking for a new challenge? Do you have a great story to tell? Is "writing more" one of your New Year's resolutions? Now is your chance. Anyone and everyone is encouraged to submit!

A panel of Magnet community members will read the submissions and select a total of five plays, so get excited, because auditions for these plays will then be held at the end of February. Are you an improviser who wants to try some honest-to-goodness theater? Are you an actor looking for a new show? Is "doing one thing that scares you" one of your New Year's resolutions? Now is your chance! (Well, the end of February will be your chance.) These auditions are open to anyone and everyone!

All of this will culminate in the debut performance of our five original shows at Magnet Theater's Very Own 10-Minute Play Festival, Sunday March 19th and 26th, at 7:30pm! We are so excited to stretch our muscles a little bit, try something new, and showcase all the amazing talent the Magnet Theater has to offer!

FAQs
What is a 10-Minute Play?
A 10-minute play is exactly what it sounds like. It's a One Act that is only 10 minutes long.
What makes a good 10-Minute play?
First of all, they have to be 10-minutes, so don't submit anything over 11 pages. Be careful of too much exposition. A 10-minute play has to pack a lot into a short time. If we want to see a whole journey in under 10 minutes, clarity and economy are key. Make every line do work for you. To that end, keep tech fairly simply, and you usually wouldn't see more than 4 characters (only 2 or 3 is even more common). Also, have fun! (There are tons of resources online if you'd like to do some research!)
What are the important dates?
Submissions for original plays will be open January - February 19th (though start writing now!) Auditions will be February 26 - 28. Show days will be March 19th and 26th at 7:30pm.
Can you submit if you're not a part of the Magnet community?
You bet! Though slight preference will be given to members of the Magnet community.
Any further questions? Just email Magnet10minuteplayfestival@gmail.com. Diversity applicants strongly encouraged to apply!
Tags: 10 minute play festival, acting, auditions, Festival, FESTIVALS!, magnet, magnet theater, plays, playwrights, playwriting, submissions, theater, writing
Site Credits