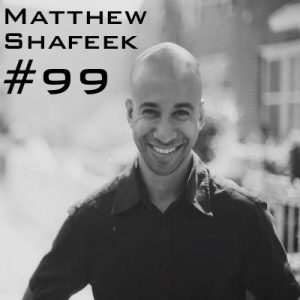 A Megawatt performer since the very beginning, MATTHEW SHAFEEK, joins host Louis Kornfeld to talk about the different eras of Magnet, being a class clown, and, oh yes, gaming! These two performers go way back and have a lot of fun with this conversation. See Matt perform each week on Wednesdays with Metal Boy and on Saturdays with The Armando Diaz Experience!

Louis kicks off the episode my enlightening us to the fact that this Metal Boy has been in and out of Megawatt since the VERY beginning of Megawatt. How many teams has he been on?? Louis tries to guess! He and Matt discuss the different eras of Megawatt and even reflect on the days when you could take an eight-week Armando Diaz class for $99. Matt describes the role that improv has taken in his life and the balance it provides. He and Louis talk about what it means to be a class clown and Matt surmises that joking around in school was the beginning of his career in comedy. He even tells of the fan club he once created for himself! Both guys reflect on how nice it is to hang around comedians without having to do bits all the time and you won't want to miss the moment when Louis says something that he thinks sounds insincere! That's all before Louis asks about Matts life off-stage and he tells us that he's a big time gamer. Matt gets into the board-game renaissance, how incredibly helpful games can be in social situations, and how gaming may be the future of storytelling. There's no hotspot on this episode, but you better believe that we cap it all off with A Serious Scene Opposite A Jar Of Pickles! Huzzah!