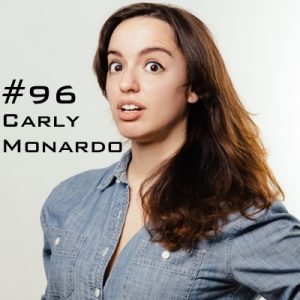 Animator, illustrator, and Magnet performer, CARLY MONARDO, joins us to talk about the links between her different disciplines, who her heroes are, and what drives good characters. Plus, she plays monologue hotspot with Louis and performs a serious scene with a jar of pickles. Carly started at Magnet with the Free Intro to Improv class and now performs on Megawatt with Metal Boy, on Magnet Sketch Teams with Dinosaur Jones, with her duo TJ & Blood, and every Saturday night with The Cast! She's also created the artwork for dozens of different shows at the theater and helped drive the Magnet's visual identity. Could she BE anymore wonderful???

Carly begins this episode talking about how she first became interested in improv by watching shows at UCBT and then seeing Musical Megawatt at Magnet. Her first class was the Free Intro to Improv class, which turned out to be a really good idea. Louis pauses the improv talk for a bit to ask about how Carly got into animation, graphic design, and art in general. She talks about having to take an acting class in college and how the lessons learned while studying animation have bled into her performance. They also attempt to answer the question of what drives characters. Is it all ego-driven? Louis can't let the opportunity pass to ask Carly what she did on The Venture Bros., what her proudest projects have been, and who her heroes are! Plus, they throw a lot of shade (and love) at Sulaiman Beg. Our episode concludes with a wonderful round of two-person hotspot based on the suggestion of a rose by any other color and Carly performs A Serious Scene With A Jar Of Pickles. You'll have to listen in because these two native Staten Islanders have a grand old time!