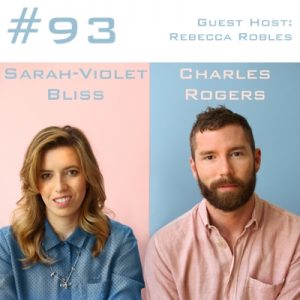 Filmmakers and co-creators of the upcoming series Search Party, SARAH-VIOLET BLISS & CHARLES ROGERS, join special guest host Rebecca Robles to talk about about their big projects, the formation of their partnership, and of course, showbiz. Their 2014 film, Fort Tilden, was completed in a single summer and won that year's SXSW Grand Jury Award. Since then, the duo has written for Wet Hot American Summer: First Day of Camp, Mozart In The Jungle, and their upcoming TBS series Search Party, which they also directed. Join Rebecca as she talks with SV and Charles about their comedy careers, the ethics of media, and much much more.

We kick off this episode with the thrilling reveal that Charles has known our engineer, Grant, since high school and that everyone has been in HAIR. Rebecca introduces us to her very smart and cool friends, Charles and Sarah-Violet. She asks them about what it was like to have their families experience Fort Tilden for the first time and, in general, the feelings that arise when having their work screened. Hear SV and Charles discuss the stress of such situations, and how to celebrate success and vent frustrations in the strange and competitive world of showbiz.

Our guests answer hard-hitting questions like: "Has SV ever done improv???" and "What is Twitter for???" They comment on working with improvisers on set and we hear this dynamic duo's origin story, which began in a grad program at NYU. Though Rebecca may know something about it already, for our sake, she asks SV and Charles about the magical process of making Fort Tilden and what it was like to move quickly on such a large project. She also wonders how much of  Search Party is influenced by Fort Tilden? Our two visitors talk about addressing ethics and gray areas in their work and how wanting to be seen as "good" is a major theme of Search Party. Plus, they offer thoughts on how social media is best utilized and how people should go about asking for help. It's all about looking to give and receive love, rather than asking what someone can do for you. That, my friends, is some damn good advice.