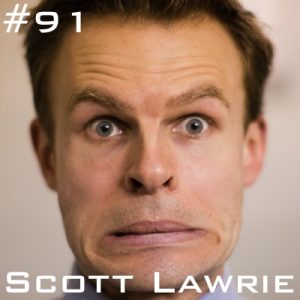 Founding member of Magnet mainstays The Wrath, SCOTT LAWRIE, tells us how he got into improv, of his time working in broadcast television, and what it means to be "taken care of" on stage. Learn a bit about Scott's upbringing, his penchant for preparedness, the hallmarks of field production, and his love of The Golden Girls. We love Scott. Scott loves you. And you'll love Scott after listening to this (if you don't already). Check it!

Our episode kicks off by discussing Scott's love of "dream characters" and how he was roped into improv in the first place. A fan favorite on Magnet's stage, Scott says she started improvising relatively late after getting a career in broadcast news off the ground. He tells of how his predilection for preparation has influenced his life and eventually, his comedy. Taking improv classes got Scott saying "yes" more often and highlighted how numerous shifts in power could be. Looking to dig a bit deeper, Louis asks Scott where his comedic sensibility comes from and identifies two of Scott's improv trademarks. Scott illuminates some of the advantages of growing up with financial concerns and other life challenges while also discussing with Louis the ideas of awareness in the world and being in touch with oneself.

Venturing into another aspect of Scott's background, Louis inquires about his career in broadcast journalism and working at NBC. One thing that hooked Scott on the field while he was studying it in college was the ultimate goal of helping people tell their stories. He talks a bit about working as a producer in Las Vegas and then deciding to give NYC a try, which has turned into an 11 year experiment. Getting into the nitty gritty, Louis and Scott discuss the hallmarks of field producing, accountability and ethics in media, and what Scott looks for when watching the news now. He also steps us through his path from broadcast news to broadcast comedy! Scott worked for years at The Colbert Report (from nearly the very start to its end) and more recently, at The Late Show with Stephen Colbert. How did improv help him make that life shift?

Wading further into the improv waters, Scott tries to answer what it means to be "taken care of" on stage. He talks about lucking out with his first and only team, The Wrath, holding onto their sacred rehearsal time, and how it's the best way to end a tough Monday. Louis identifies one of improv's greatest byproducts and where it comes from, and Scott (perhaps) coins the term, "Thelma & Louise'ing it together." Louis makes mention of power in improv and how The Wrath's comedy has a way of always hitting hard. For over four years now, they've given the Magnet comedy that is personal and yet pointed at society. How do they do it? What does Scott look for when improvising? To answer these questions, and those beyond, Scott and Louis discuss the television shows Designing Women and The Golden Girls. Scott notes the relation of these shows to young gay men and Louis draws the fine line between order as a force of evil and order as an agent of good.

To close, we're sad to inform you that Scott will soon be moving to the West Coast, but it sure sounds like he crushed it in New York. We'll miss you, Scott!