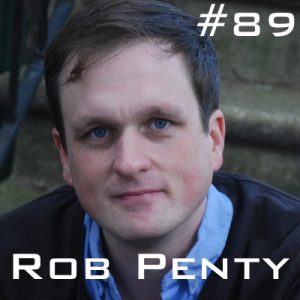 Improviser and storyteller extraordinaire, ROB PENTY, talks about why he hates Stella, how humor can help us deal with life, and the arc of his comedy career. He and host Louis Kornfeld also discuss their complex feelings on absurd humor, what Rob loves in comedy, and of course, The Wrath - Rob's long-running Magnet house team. There's a
cool karate belt analogy and plenty of Penty to warm your heart. Check it out!

Louis DIVES right into a hot, controversial topic: Robs undying hatred of the sketch group Stella. Louis attempts to defend the trio but the best he can muster is Rob's acknowledgement that maybe the TV show was okay. Rob challenges the notion of, "If it makes you and your friends laugh, it can make an audience laugh," and they both offer examples of random sketches they love and/or hate. Why do people like truly absurd humor? For fans of obscure sketch shows, they recall some of The Dana Carvey Show's best pieces.

With so much criticism of comedy up to this point in the episode, Louis switches gears to ask what Rob DOES like about comedy. They talk about bravery in comedy and how it can work for us within the greater context of our lives. One benefit they explore is the ability to laugh at something uncomfortable and how helpful that can be. Rob provides us with some background on his comedy career, starting with standup, and the arc it has taken over the years. Plus  Find out whats been jazzing Louis about improv lately!

To bring it all home, Rob makes a cool karate belt analogy and Louis asks about his time spent with The Wrath. Give this one a listen and check out Rob's website, Actually, It's Rob Penty Dot Org.com