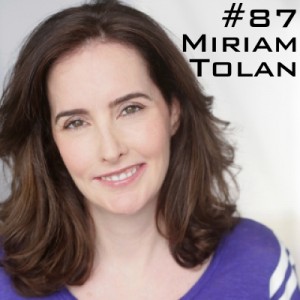 Seasoned improviser and actor, MIRIAM TOLAN, talks with us about her days at Second City, theatricality in improv, and chasing the high that comes from long-form. Growing up outside of Chicago, Miriam was almost fell into becoming an improver and she continues to perform and teach today after doing stints in Chi-town, New York, and LA. Recently, she's back in NYC and agreed to sit down with us to talk about her journey!

Miriam has been improvising for decades now, and Louis kicks off the episode by taking it all the way back to the beginning. Hear about the influence of SCTV as a gateway drug into comedy and how Miriam caught the improv bug. She tells us about starting at Second City while in college and how serendipitous it was that she happened to be from Chicago. Miriam says she loved every minute of her Second City experience and, to prove it, provides us with an inside view as to why. Louis recalls that she was a member of the "tall cast." Hear Miriam all about a month-long tour experience in Texas and goofing around while on traveling with her TourCo cast.

With so much experience performing for audiences of all kinds, Louis wants to know Miriams gauge on crossing the line with an audience in terms of placating them versus antagonizing them. She answers with examples from Second City's storied cast members and how different people have handled that balance. Speaking of Second City, Louis inquires about how it was coming into SCs historically political sensibility, having been raised in a time of more character-based comedy? This leads down a delightful rabbit hole talking about ED and Jazz Freddy, two groundbreaking long-form shows in Chicago. Miriam and Louis discuss how the theatrical quality of these shows changed the improv landscape and paved the way for current acts like TJ & Dave and Stolen House. Acting and improv were two very different worlds before the formation of these groups, she says. Louis wonders if actors are looking for something different in a scene besides the laugh and while Miriam can't answer for them all, she answers saying that she is always looking for connection.

Moving forward to today, our illustrious duo talk about making adjustments in their own shows after going to church by seeing an act like TJ & Dave. "How can you not overcompensate?" they ask. Louis claims that when youre doing an impression of someone you admire, youre doing the opposite of what makes them who they are. Miriam and Louis talk about tapping into a sense of not knowing why something works and chasing that invisible high. Miriam describes trying to find a similar sense of magic in scripted work and the challenge of such a task. At this phase, Louis wants to know, what keeps Miriam excited about this improv stuff? He also recalls his love of The Tiny Spectacular, Magnets one-time, uber-stacked, Saturday night show.

They end the episode discussing how Miriam approaches teaching and how long-form has a way of finding its way back to short-form. Finally, the question is answered: Whats the ulterior motive to a hug?