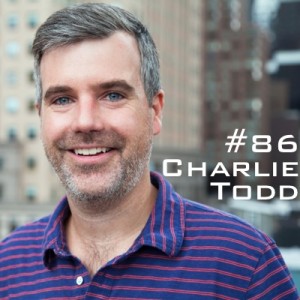 Founder of Improv Everywhere and UCB stalwart, CHARLIE TODD, joins us to talk about causing scenes, his early days at UCB, and Two Beers In, his new political roundtable podcast! In addition to his infamous prank collective and budding podcast, Charlie plays at UCB on Saturday nights with The Curfew and has hosted UCB CageMatch on Thursday nights for the past 13 years. We're so happy that Charlie took the time to sit down with us and we know you're gonna love this episode!

Louis begins the episode diving full force into Improv Everywhere, but not before he describes a conflict he had just witnessed on the subway. Charlie contrasts Louis' tale by explaining how the mission behind IE is to create positive public moments that foster community. Our duo discusses the path that IE has taken over the years and Charlie tells us about the origin of the project, which started with a Ben Folds prank. They talk further about the rise of IE in parallel with the emergence of blogs, YouTube, and internet connectedness. Charlie describes the current YouTube landscape and notes how the competition between creators and corporations has grown as of late. He also talks about branded content and how artists pay for their creative processes. Louis asks how Charlie deals with cases of when brands or other organizations co-opt IE concepts and the use of viral content for the sake of marketing.

Moving away from the business side of things, Louis wants to know which prank ideas pass Charlie's bar for inclusion, how he feels about going global, and what it's like organizing large groups of people to do things without a set outcome. Charlie walks us through a somewhat recent run-in with the police and tells us how IE deals with authority. Louis expresses to Charlie how the work of Improv Everywhere makes New York feel a bit smaller and you'll find out why Charlie really hates the term "flash mob!"

Switching gears, Louis talks with Charlie about his early days at UCB. Fun fact: He heard about the UCB from Hollywood's T.J. Miller while studying theater in England! Another fun fact: Charlie took his Level 1 with Armando back in 2001. Since he's been around for UCB's meteoric rise, Louis asks if Charlie was he able to see the history happening as it unfolded, or if it was more of a sudden realization? Plus, how cool was it when Conan was still in New York? Right, guys?? And it just wouldn't be a podcast with Louis Kornfeld if they didn't explore something philosophical like the cyclical nature of performing improv on the same stage for years on end.

Charlie and Louis wrap up this episode discussing Charlie's newest project, Two Beers In, a tipsy political comedy podcast and live show which he co-hosts with his wife Cody Lindquist. Its a political roundtable where everyone has chugged a couple beers before the talking starts. Do yourselves a favor and check it out!