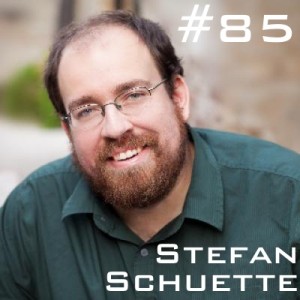 A joy to watch on UCB's Harold Night and TourCo, STEFAN SCHUETTE, joins host Louis Kornfeld for a heavy dose of improv nerdery and to share his improv journey with us. Stefan moved to the city five years ago, has studied everywhere, and currently flies all around the country performing improv. He loves the craft so much and he's so damn funny, we just had to have him on!

Not too long ago, Stefan hosted his own improv podcast (Improv Noise), on which Louis was a guest, so you can consider this the episode of Frasier when Ted Danson shows up! Louis starts out by asking Stefan to walk us through his route to a life of comedy. Stefan had been doing improv forever in various places and styles when, five years ago, he finally moved to NYC to chase the dream. First being cast at UCB as a member of UCB TourCo, he was then placed on Lloyd Night and quickly rose to Harold Night, where he currently plays with Some Kid. Louis asks him to compare the experience and approach of performing with TourCo versus Lloyd Night and then goes on to contrast Lloyd with Harold Night.

As promised, we get a deep dive into a number of improv techniques and approaches. On the Harold structure itself, Louis and Stefan discuss what we can call a Harold: Does it need to be a particular structure, or can it be anything long-form? He talks about TourCo performances and how they strive more to show the crowd funny scenes than the mastery of a form. Our pair makes a fuss about preparing the audience for what they're about to see and Louis asks Stefan about his approach to interviews at the top of shows.

Although he considers himself more of an organic player, Stefan has been playing almost strictly premise-based improv for two years now, so he provides advice on building those premise muscles. Louis inquires about Stefan's coaching and what he most often focuses on, and we are given a beautiful analogy that relates improv to a baseball card stuck in bicycle wheel spokes. They discuss having longer-term goals to focus on with your team and Stefan provides more advice on second beats, third beats, and callbacks. They also explore how group mind influences performances.

As we approach the end of the episode, Louis asks Stefan about how he comes across as a human and what it means to be "specific." To wrap it al up, our dynamic duo talks about the Keith Johnstone style of improv, which is found all over the world. One thing's for sure: they love opening doors.