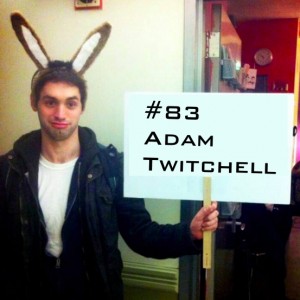 Student Council member and a big wig in The Music Industry, ADAM TWITCHELL, sits down with host Louis Kornfeld to discuss production value, physical comedy, and his indie team EagleFox. Adam compares his two most recent sketch teams, comments on the evolution of the sketch program at Magnet, and even shares some ideas for sketches taken straight from his notes. Finally, he talks about being jobless. This episode with lift you up!

We pick up in the middle of a conversation between Adam and Louis regarding the sketch "Lost at Sea," which Adam wrote and performed with sketch team, Wendigo.(You can watch it below.) He and Louis discuss writing sketches that have a bit of production value and he walks us through the creation of "Lost At Sea." Jumping off of on the themes of physicality and stage pictures, Louis asks Adam about his silent movie show and and he talks about how hes a big fan of not only that category of films, but playing with genres in general.

Speaking on tropes and old films, Louis and Adam ponder how to go about writing something original in an era where everything has been done. Adam is now a member of sketch team Student Council and he relates how it is working with them versus his previous team, Wendigo. He also tells Louis how much he enjoys sketches that require a decent amount of research, even if he's writing about the business of something like the Wonka corporation.

Adam reads some real ideas for sketches from his phone and tells us what he gets from the room during the creative process. He and Louis talk about traveling to sketch festivals and how shows should flow. Having been a part of it since the very beginning, Adam answers questions about how  the sketch program at Magnet has progressed since its inception. Louis shares some of Armandos best advice for sketch and asks Adam what wisdom he would impart upon someone who is greener in the scene.

Getting controversial, Louis asks Adam whether he prefers improv or sketch, OR if he loves them both equally, like children. Without giving anything away, we'll just tell you that Adam recently joined Megawatt veterans The Music Industry and still finds time to play with his indie team EagleFox from time to time. He notes that camaraderie is the #1 best taste to making an indie team great and keeping spirits high. At Louis' behest, he details the legend of EagleFox's "Hair Mona Lisa," which is a part of INSPIRADO folklore.

We conclude this episode with Adam discussing his "quarter-life rediscovery," his current jobless state, and by finding out our guest's top five desert island comedy picks.