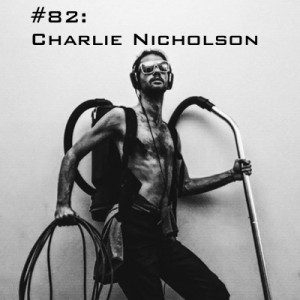 Spartan improviser, Executive actor, and director of Object Work, CHARLIE NICHOLSON, sits down to discuss his upcoming Directors Series, harnessing risk on stage, and RuPaul's Drag Race. Throughout the episode, Charlie and host Louis Kornfeld find a great deal of common ground as they discuss things like ambiguity on stage, forgetting one's self in a show, and how to approach leading an ensemble. It's a beautiful episode with beautiful people and how about that pic, right??

To begin, Charlie opens up about his nerves regarding each show and how he channels them into preparation. He tells us why he loves The Medusa and how he seeks to inject something different into each show the performs. Louis latches onto the topic of small moments and they discover their mutual reverence for well-placed ambiguity. Then, Louis offers that works of art may serve as outcrops of ourselves which help us frame ambiguous moments. How philosophical.

Moving from the abstract to the human, Louis asks Charlie about his style as an improviser and they talk about Charlies love for risk-taking on stage. They also touch on Charlie's favorite thing to experience in a scene partner. Louis makes a puzzle analogy, folks! Charlie talks about forgetting himself amidst a show and the conjuring of magic on stage. What does is mean to play "out of control?" Charlie and Louis offer up two competing definitions and discuss each. Plus, learn how Charlie's natural curiosity fuels his performance and find out his recommended reading for Louis.

With its upcoming run looming, Charlie passionately shares with us his thoughts on April's Directors Series, Object Work, which came to him in a dream. He espouses his love for extending ourselves beyond our bodies and bringing life to the lifeless. Additionally, Charlie shares how he approaches directing a group of experienced performers he so adamantly admires and he and Louis go on to discuss different learning and teaching styles. To wrap up the episode, Charlie shares some of his favorite books and media, and of course, he and Louis discuss RuPauls Drag Race.

*Charlie wants us to note that, at time of recording, he goofed on the authors name of Silently and Very Fast. He said "Catherynne Valero" but what he meant was "Catherynne Valente."