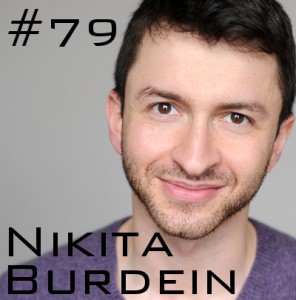 Singing, improvising, and teaching fool, NIKITA BURDEIN, joins us to talk about emigrating from Soviet Russia, discovering improv in NYC, and how to approach auditions. Amidst all of that, he and host Louis Kornfeld discuss religion, what makes theater so special, and finding comfort in declaring who you are. Recorded yesterday, released today  this is a fresh, hot 'cast!!!

First thing's first: Louis wants to know how the incredibly busy Nikita Burdein is able to do everything he does! Nikita performs Tuesday through Friday at Magnet and spends many other days coaching, teaching, practicing, or playing elsewhere. We got tired just writing that! [See him on Musical Megawatt, Megawatt, The Directors Series (April & May), and Premiere.] Given his jigsaw puzzle schedule, Louis wonders if Nikita is a very disciplined person. Well, he was born in Soviet Russia, a fact which might give you a hint.

Nikita and his family came to America (Chicago) when he was four years old with the help of the Jewish Federation by way of Italy. It's a very fun story, so we do hope you listen. He tells us how his immigrant background influences his improv and Louis suggests that his own brain is beginning to fail him. The two discuss puberty hair before seamlessly segueing into a discussion on Judaism. Though culturally and ethnically Jewish, Nikita was raised a devout Atheist who eventually went on Birthright at the age of 26. Louis shares with us his frustrating feelings regarding Israel and they both try to figure out what the connection is between Jews and their prominence on Broadway.

Having spent time exploring how Nikita arrived in this country, Louis asks about his journey from Chicago to New York. Nikita talks about getting into theater during high school because of his brother and getting into film in college, again, because of his brother. He went to NYU and graduated an editor, which is something he still does to this day. Along the way, Nikita finally began improvising at the age of 28 and totally fell in love with it. He and Louis chat about the connection with the audience that live theater provides and how improv has a built-in benefit of knowing that the people out there with you love what they do. Theres a lot of love going around the improv community, Nikita reports. Though very active and quite visible as an improviser today, Nikita says he was in the closet about being an improviser initially. On a related note, Louis asks Nikita how much energy he gives to other peoples thoughts of him, which morphs into a discussion about coming out and sexuality. Nikita came out to his parents at age 23 and tells us that it made him a more honest person all around. And he hasnt looked back since!

Louis takes the opportunity, with both Megawatt and Musical Megawatt auditions right around the corner, to discuss auditioning and to ask Nikita for advice on the matter. He also asks Nikita about the end of his run with Deep Queens on Megawatt and the somewhat recent start of his time teaching Musical Improv Level 1 at the Training Center. Has he discovered anything since he began teaching? You betcha. But you'll have to listen to the episode to find out. (And no skipping to the end!)