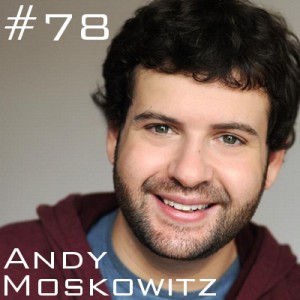 Ariana Grande's BFFL, ANDY MOSKOWITZ, is on the podcast talking substance abuse, vulnerability, and of course, Mother's Day. Andy talks about getting his improv start in Philly doing ComedySportz and shares with us his Behind The Music moment. Plus, he and Louis try to write a joke together! Tune in for a whale of a good time.

In seven short years, Andy Moskowitz has gone from his first improv class in Philadelphia to working on The Late Show with Stephen Colbert in New York City. Not bad, eh? This improviser-turned-researcher talks to us about getting into ComedySportz while living in Philly, which was inspired by a reading of Malcolm Gladwell's book Blink. Andy dives into his darkest times at ComedySportz, in what he tells us is his "Behind The Music" moment. (Preview: It involves both NA and AA.) Louis and Andy use this as a prompt to discuss the common notion of taking the edge off and how it can be a misguided practice. Theres a value in being vulnerable, they agree. Andy also shares his favorite little cheap move to make in shows.

Next, our boys discuss the middle ground between smart and stupid humor, suggesting that the best stuff is really both. Andy says he's been re-watching old Simpsons episodes and loving the smart/dumb writing. Louis loves the act of using all of your smarts to birth something truly moronic. He recalls an old Baby Shoes sketch, which Andy wrote and acted in, that was very dumb, but certainly smart at the same time. Speaking as a writer, Andy says he is a "quality over quantity" type. He goes on to share another dark story from his past, this time about his grandfather dying. This means nothing unless you listen, but Louis is convinced that theres no such thing as a friendly goose and he also believes that the fact that we all crap when we die is something that's not talked about enough. He and Andy opine on the relatable threads we find in comedy and how they can open us up to our own discoveries. Plus - Find out why Louis never smiles!

Circling back to the topic of television, Louis claims that TV has addicted us to watching everything for the story despite that there are other pleasures to be had in a piece of art. They talk about the realm of horror comedies and again discuss bringing vulnerability to performance. Andy professes that by owning his vulnerability, he relieves the pressure to fulfill nagging brain requests. Paying our guest a compliment, Louis suggests that Andy is adept at playing both innocent and jaded at the same time, which is incredible if you think about it. How has playing with Ariana Grande affected Andy? He fondly recalls their "Clue" show.

Almost finally, Andy talks about the Mothers Day show that he's been running for the past two years and about doing improv with his mom. He also tells us how his mind has changed since he began working for The Late Show. Having gained a better understanding of joke writing and professional comedy writing, Andy and Louis attempt to co-author a joke. Does it work?! Really finally, these two humans talk about how improv helps shake off the importance bug.

P.S. Finally - Oh, but then they talk about film critics. (There's just so much good stuff in here!)