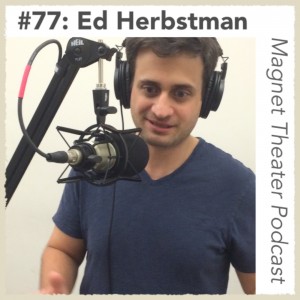 Magnet founding father and sometime Mantzoukas brother, ED HERBSTMAN, talks with us about his Chicago days, moving to LA, and what makes improv satisfying. Ed was on his first team at iO Chicago by age 17 and by the time he and his friends moved to LA, they were attracting industry attention. If this sounds like a fantasy world t0 you modern improvisers, Ed and Louis will make it reality. Also, tune in to hear how love landed him in NYC and what it's like to play with famous people.

This episode begins with one of the toughest choices Ed Herbstman has ever had to make...

...the choice between helping to open iO West in LA 0r staying in Chicago to continue on the path to Second City Mainstage. Though it was painful at the time, he now has a wife, two children, and a theater, and seems okay with his choice. He does warn though: nobody comes back from LA. Louis asks Ed about being a confident improviser hanging with people a shade older than him as a teenager on iO's Harold teams. This was during The Familys run and these two discuss the Old Guard vs New Guard in Chicago. Ed attests that Del was all about purity. In addition to being in this environment from the ages of 17-23 years old, Ed had also studied for a year at SecondCity Northwest. Don't be fooled by his youthful good looks: he's been doing this for a long time, baby.

Flash forward to Los Angeles, where Ed had moved to not only help open iO West, but to work with his team Bitter Noah. He tells of Bitter Noah's commitment to The Movie form and their being courted by "industry" (which are the people in Hollywood with steady jobs). Dennis Miller once complimented Ed at a festival and hes never gotten over it. For just a moment, Ed turns the conversation on Louis to talk about The Boss and Louis inquired about comedy groups that have their eye on the prize. Referring to his previous big decision, Ed reports that friendship overrode all other priorities when deciding between LA and Chicago. So how the heck did he end up in NYC? To put it simply, Ed landed in New York because he followed love. He met his now wife and moved to NYC to be with her.

Continuing on past the romantic stuff, Ed describes LA to Louis, who has never been there, and then Louis asks Ed if he feels pressure to be funny when working with improv nobility. They talk about dealing with celebrities and that one time Mike Myers sat in on a Mantzoukas Brothers show. They discuss playing in the spirit of eff it, playing with confidence and without fear. Louis still uses one of Eds old metaphors from a class he taught, but you'll have to listen find out what it is. Louis questions the contradictions that arise from improv teachers (and improv wisdom) and Ed asks "Is the work satisfying?" That should be the true measure of an improv scene. If you want to shock people in an improv show, be decent and good, he proclaims. He also asks: How close to the moment can you play? Why are people saving their ideas for later? Is it Snapchat? It took quite a while for Ed to work a bit into the show, but by the time he does, everyone is pleased.

Louis and Ed also talk about approaching game and how to deal with second beats. The more Ed improvises, the less he has concrete opinions on it all. But his final lesson is steadfast: Don't be a jerk. Or at least, have empathy for your fellow jerks. Tune in, nerds!