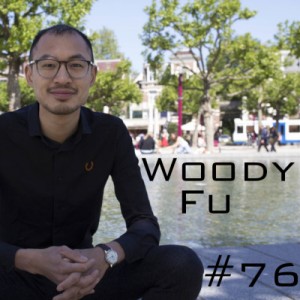 Boom Chicago cast member and former Magnet baddie, WOODY FU, visits from Amsterdam to talk about building Second City style sketch shows, living abroad, and his comedy ambitions. It's his first time stateside since moving to the Netherlands and we are thrilled that he decided to spend some time talking with us about his experiences with Boom Chicago as well as his recent reunion with Metal Boy. If you're not interested in sketch comedy or improv, stick around for Woody's winning personality, which he describes as, Extremely neurotic and Chinese.

Woodys been gone for nine months and his first trip back to the Americas has been filled with tropical sunshine, winter snow, and Metal Boys. Confusing, you say?Before landing in snowy New York, Woody spent a week in sunny Costa Rica, taking part in the Happy Soul yoga and improv retreat. Louis asks Woody about his week in paradise and in response, Woody describes his feelings of intense guilt when relaxing and not multi-tasking. For somewhat similar reasons, Louis really hated spending time in Maui. These guys, huh? Woody's first trip out of Europe has given him some time to reflect and consider the last few months of his contract with Boom Chicago. He discusses Boom, the experience of writing sketch comedy for the first time, and doing short form improv for tourists. Within this, he talks about the expectations he had going into such an adventure and the learning curves of new performance styles. Louis asks Woody about the lifestyle of working with a six person cast in Amsterdam and the endurance of the show process. Woody describes the patented "Fu Family Conflict Resolution 101" and our producer, Evan, adjusts his collar. One thing Woody talks about in detail is protecting the material of their Boom show, some of which plays with the fact that theyre a diverse cast without a traditional straight, white, male member. Louis and Woody both shares stories of dealing with hecklers and audience disruption. You must be wondering, "What does Woody love about doing the Boom Chicago show?" This is answered! Also, he and Louis dig into the specifics of "show process," pitching sketches, and running order in Second City style shows. Woody discusses his drive and ambition as it pertains to comedy  what he was thinking before Boom and wheres he at now. Hear Woodys worst sketch pitch from his tenure thus far! Plus, Louis says something like, "The path begins revealing itself by doing it." And Woody talks about doing his first Metal Boy show in nine months at a recent Megawatt. Finally, they talk about benefits and deficiencies of short form. This could have been a great episode, but Woody should have fallen off a cartoon cliff to really seal the deal.