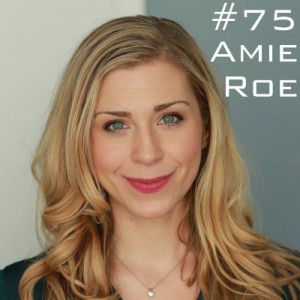 Improviser and therapist, AMIE ROE, talks with us about using play to understand ourselves, awe in the world around us, and her upcoming show, Group Therapy. In addition to improvising with the real Ariana Grande, Amie is a psychotherapist in private practice, which is is a wealth of experience she brings to this fascinating conversation that touches on improv, creativity, self-awareness, and humanity. This episode is one that truly any thoughtful human would enjoy, improv experience aside. Robots may like it too, but we can't guarantee it. See Amie every Wednesday at Megawatt with Ariana Grande and catch her new show Group Therapy on Friday, February 12th at 7pm!

Louis and Amie start off talking about hit HBO series The Jinx and how people express many of their issues through play or via their interactions with others. There seems to be a need to have one's expressions recognized and heard and Louis theorizes that perhaps one reason why improv often feels life-changing may be the fact that it puts people in a room with those that will listen to them. Amie says that, whether in real life or on stage, we often find ourselves replaying difficult scenarios in order to come to terms with them. Louis inquires about the difference between expression that is safe and healing versus the more detrimental kind and finds it might have more to do with awareness than anything else. Not only must we be self-aware, but we need to be aware of those around us. Certainly, there are improv lessons abound.

Amie tells us about what she recognized in herself that led to her becoming a therapist and Louis wants to know how we can gauge what amount of revisiting a personal struggle is healthy. Moment to moment, Amie suggests that the most important factor is whether or not you're making a conscious choice. They also discuss how, when a person undergoes change, it can be difficult for those around them to adjust. Louis posits that maybe editing in improv scenes trains us to make shifts in life more easily. He also talks about recognizing the shape of a show and making how adjustments can not only help the overall show, but also empower you to be decisive. Amie concurs, adding how empowered decision-making can be a powerful tool for combating that which nags at us.

Humans spend more of their lives as children than most species and, as such, it seems like play is an important part of who we are. Amie says that finding ways to be creative is something we all need. Bringing the worlds of play and self-analysis together, Amie talks all about her new show Group Therapy, which will focus on food and body issues. With elements of comedy, circus, and song, the show also features several real world specialists discussing the issues presented in the art. Regarding body issues, Louis asks why it is so hard to avoid them. He also digs into comedy and respect, noting that while many people are able to exercise taste and sensitivity, some still find it hard to navigate. They discuss the extremes of the sensitivity spectrum and surrendering to the dark and horrible parts of life when doing comedy. Louis says that living life is a contradiction and that on the other end of futility, which we are all prone to feel at times, is a sense of awe and wonder. They talk about awe and faith and raise the question, "Are smart people ruining life for themselves?"

The episode takes a delightfully philosophical turn as Amie suggests that abyss and emptiness are the seeds of creation. Louis adds that nothing surprising can happen if you're already filled up with everything and waxes Eastern philosophy on improv comedy. To be able to take a step back and understand the humor in something, they both agree, is an act of consciousness. Plus: Is that burger your enemy? We have to put our stuff somewhere, don't we? And after discussing everyone's 83 problems, it all comes back to Robert Durst. The final lesson? Louis claims that the healthy person is the one who has integrated their problems rather than outrun them. All this and more. Or less. We're not sure what's best.