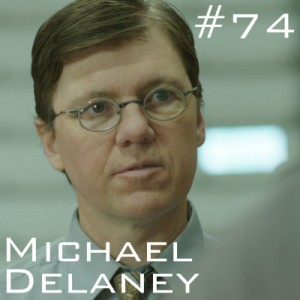 Founding member of legendary UCB ensembles The Swarm and The Stepfathers, MICHAEL DELANEY, sits down with host Louis Kornfeld to talk truth in improv, how time has affected his approach to comedy, and his reverence for the Harold.  Not only has Delaney been doing improv in NYC since before the arrival of the UCB, but he's long been considered one of the greatest minds in both improv and sketch that this great city has to offer. Listen in to hear Louis interview his former teacher and to find out what gets under Delaney's skin.

Louis took Delaneys Level 3 class thirteen years ago and he still has his notes from it. Beyond that nostalgia trip, Louis and Delaney quickly get into a discussion on speaking to the truth of a situation. In exploring this concept they address the practice of "calling out" your scene partner and how it can be done appropriately. They talk about being more flexible and less rigid when approaching the Harold. For the Harold as a whole, and for artists in general, both agree that variety is good and healthy. Delaney's most trusted advice? Making the active choice is king. Louis is on a "purposeful" kick right now and he wants to know what Delaney thinks of that notion. Don't you?

Hear Delaney talk about his own aging within the world of comedy and how he thinks comedy has aged along with him. He believes that having kids has made him a less funny improviser, which is something Louis can't yet relate to. As someone who has stayed in the improv game for so long, Louis wants to know what's kept Delaney driven this whole time? Where does his ambition lie? Delaney talks about what he thinks the best comedy work is and how his taste has changed over time. He also speaks frankly about why hes failed so badly professionally. It seems to have a lot to do with doing what keeps him happy. These guys claim that, as professional improvisers, they are living better than kings of the middle ages!

Louis tells us what he admired about Delaney when taking his class 13 years ago and gets him to talk about his reverence for Harold. They debate how audience participation has developed further since Harold was introduced and how it's different than what's experienced with short form. At around this point, I stopped taking notes for a few minutes because the things Delaney was saying were so interesting.

They talk about getting stuck on facts over truth and ask the question, "Does every truth need a justification?" Louis claims that many justifications are simply apologies and Delaney unloads some BS hes really tired of. He also gets into the difference between starting with a premise versus living in the discovery phase of the scene. Penultimately, they try to crack open the difference in the game of the scene between how Louis understands it and Delaney might interpret it. And finally, Delaney lets us know when to let the subconscious fly in the Harold.

As a bit of a post-script, Louis asks Delaney about about The Swarm and The Stepfathers and what makes for a truly outstanding ensemble! Get in there, folks!