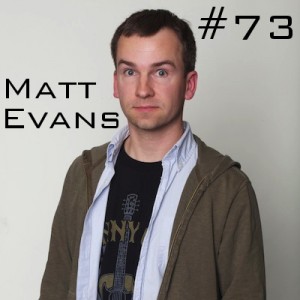 Jealous Dad and 1/4th of Hello Laser, MATT EVANS, joins us to discuss straight-manning, his old soul, performing characters, and how he stinks at object work! Hot off the heels of this recent pilot, Jealous Dad, Matt is getting ready for Montreal Just For Laughs auditions and finding that the scripted work he does these days can be more nerve-racking than in the past. He tells us of his history in NYC comedy dating back to 2004 and how much he loves Bob Newhart.

To get the ball rolling, Louis asks Matt to talk about his prep for Just For Laughs auditions and how it's been trying out new material. He talks to Matt about what kinds of characters he likes to play best and whether or not he has a good handle on his comedic style. Though Matt self-identifies as a straight-man most of the time, he's had many a chance to stretch himself from that, especially when playing with 4-Track. Louis would say Matt is 85% straight-man, 15% Chris Farley. They chat about Matt's  affinity for Bob Newhart and how theres a part of him that feels like an older soul. Part of that might be that he felt like he was older just when he arrived in New York and started doing comedy having moved here at age 30 after working in broadcast news.

As it turns out, Matt and Louis were part of the same generation of improvisers. Matt tells of his early character work and of starting classes at Magnet right when it opened up. He also talks about the change in confidence from the early days to now, when it comes to performing characters. For some reason, we learn that Louis cant deal with the word "little." Lou asks Matt if he feels up-to-date on whats happening in the comedy world and he mentions that he watches very few things related to comedy.

Louis borrows an explanation of comedy as having two sides: the exaggerated and grotesque, and then the very real-life things that we find accessible. They explore the concept of surprising yourself and breaking away from your typical wheelhouse. Playing on teams with varying personalities seems to be one way of doing that. Matt tells how 4-Track was spawned from a Kevin Dorff class of matching, which is all they did, back and forth, for eight weeks. Louis was in the class too. Speaking on his challenges, Matt mentions trying beat the note of being neutral and how hesitation is often a form of denial. Plus, Matt thinks hes horrible at object work and Louis thinks improvers make great parents! Which of these thoughts is correct???