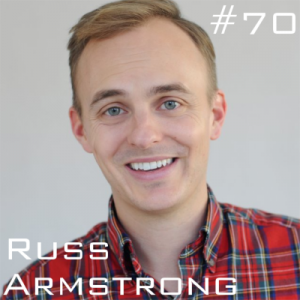 Boy howdy are you in for a delicious episode with the one and only RUSS ARMSTRONG. A writer for Uncommon Sense (MTV), performer galore (Master of None, Montreal Just for Laughs, 30 Rock), and improviser who has played on many a Magnet ensemble, Russ has plenty to discuss with host Louis Kornfeld regarding television, union workers, life balance, and confidence. Find out how Louis is feeling (creatively) and if Evan is real or just a made up character. All of this and more in Episode #70!

This episode begins with Russ and Louis talking about the podcast itself and how Louis must strive to stay ahead of his students that listen to it. Once past all of that nonsense, Louis asks Russ about his current gig writiing for the MTV show Uncommon Sense hosted by Charlamagne Tha God. What is the schedule like for such a show and how has Russ's life changed since he began writing for television on the regular? Discussing work/life balance is something any corporate drone is probably familiar with, but getting to hear a comedian's take on the matter provides a perspective most might not hear.

Further exploring what it feels like to write for a TV show, Louis wonders if the vibe of a writers room can ever mimic that of an improv team or even, improv theater. Somewhere along the line, Louis insults all union workers, as he is wont to do. Russ counters, asking, "Is there any place thats really like an improv theater?" We're paraphrasing with those quotation marks.

Russ answers questions about being funny on days when youre not feeling funny and how you push yourself through those times. He also provides insight on writing for other voices, hosts, shows, and audiences. Plus, he discovers that Louis life is very much like a Dove soap ad. What does that mean? You'll have to listen. Later, Louis launches insightful inquiries regarding Russ' comedic sensibilities and sense of a linear life. Though he may not have known where he was going as a kid, Russ finds more use for goals and planning theseadays.

Then the improv chatter heats up! Russ shares a lesson hes learned and proclaims that while improv starts with a mentality of Your ideas are great! it can often translate to something too cozy and too safe for growth. Ultimately, Russ says, you have to like your own ideas. Louis wants to know, when the pressure is on, how does Russ avoid letting fear and insecurity block him from that goal? Russ asks, "Is fake confidence different from real confidence?" Plus, Russ invents a character named Evan who doesnt exist, asks Louis how he's feeling creatively, and tells us what he says to people who tell him to cheer up! You can't stop this episode and it doesn't matter!!!