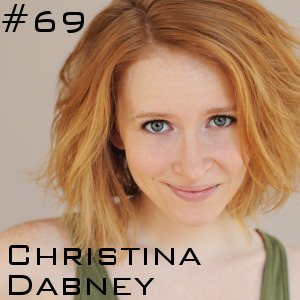 Everyone's favorite vegan, CHRISTINA DABNEY, stops by the podcast to talk about telling the truth, homeschool education, her sketch team Stockton, and of course, yoga. Plus, Louis spends some time criticizing modern learning and, wouldn't you know it, Christina gives a shout out to her mom and dad. It's a thought-provoking episode that you're just going to love.

Christina and Louis begin this episode talking about people opening up to one another in both the context of improv and in everyday life. Both have found, in different ways, that it's easier for them to be truthful when they feel it will help others  Louis perhaps to illustrate a point to a class; Christina to make people feel more comfortable in social settings. Outside of those helpful moments though, they acknowledge being oddly closed off at times, which gets them talking about anxiety as a human condition.

They get more into improv as Christina posits that the particular things a character cares about will allow it to relate to other characters. Louis asks Christina if she thinks relationships change over time and then probes into her homeschool education (which somehow includes traveling clowns) and the virtues of such a learning experience. Louis guesses that todays education system, at best, prepares one to tolerate boredom at one's future boring job.

Though she feared she'd be terrible at improv,  because it was all about being funny, Christina shares that her supportive teachers convinced her to continue and she eventually fell in love with it. Hear the story of how her first taste of improv coincided with her first yoga experience and what she loves about them both. Louis asks her, "Why are so many people turned on by doing something that has no future whatsoever?" Christina claims we enjoy pushing ourselves just to know we can do it. Louis also asks, "Is yoga just stretching?"

Finally, they touch on the practice of taking a step back from something you love so that you can return to it refreshed and we hear about Christina's sketch team, Stockton.

All of that, and! We find out the answer to the age old question, "Who does Louis hate in his yoga class?"