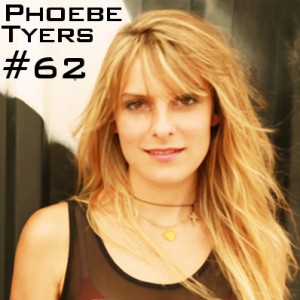 Magnet performer, writer, and talk show host, PHOEBE TYERS, joins host Louis Kornfeld to talk about the outsider view of comedians, her background in playwriting, and so much more! Phoebe performs regularly on Megawatt with The Music Industry and on Magnet Sketch Teams with Stockton. Additionally, you can catch her late night talk show Phoebe Tonight Tonite regularly at the Magnet. She and Louis dive deep into the psyche of comedians in this episode, which is perfect for all you performers and writers out there. Tune in!

This episode begins with Phoebe and Louis talking about finding comedy despite not being comedy geeks. Adding to that, Phoebe talks about how she doesn't even like being the center of attention. So how did it come to pass that this woman became so taken with the world of comedy?

Phoebe tells us why, despite making life her a mess, comedy has enriched it in a way she never thought possible. This "wildly dyslexic" comedian speaks with Louis about the secret language and point of view of comedians everywhere that link them to each other and separate them from the "pinks." Is it possible to enjoy simple things if you're conditioned to look for the skewering point?

Louis asks Phoebe about her approach to character work in improv and we hear about how certain characters allow Phoebe to share herself with the audience. They explore character and what it means to be truly playing with your teammates. Although she was first mystified by the structure and inner workings of improv, Phoebe comments on the fact that it's now become more like second nature. They talk about being zen and you get to hear about it.

Maybe you had no idea, but before comedy, Phoebe was a playwright! She and Louis compare and contrast playwriting with sketch comedy and it's all kinds of interesting. Is length the biggest difference between the two disciplines, or is it more nuanced than that? Hear about Louis' head-spinning confusion with the "assumed genius" of great playwrights. Plus, Phoebe and Louis take the pretension of certain writers to task.

They talk about Phoebe's late night show, Phoebe Tonight Tonite, and bringing a little bit of soul to everything she does. At the center of her universe is the idea of telling a good story. They circle back to discussing the beauty of being able to enjoy simple things in life and Phoebe's experience of acting in a pilot directed by Michael Showalter.