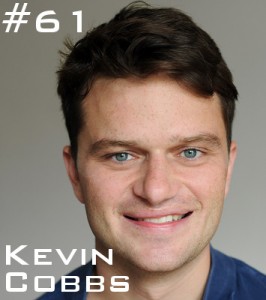 Whoa, boy! Watch out now, because local southern gentleman and big juicy peach, KEVIN COBBS, sits down with host Louis Kornfeld on Episode #61 to talk about getting his start in Atlanta, being a musician, and his comedic love of stupidity. They talk about Kevin's guides to New York, his experiences working for Second City, and what else, but being a college radio DJ. You can catch Kevin every Wednesday at Megawatt with The Music Industry and you ain't gonna wanna miss this episode!

And the episode begins with a song of rebellion! Just kidding, folks. This episode starts off with Kevin talking about being from Atlanta, getting his start in comedy at Dads Garage, and moving to NYC in 2010. Although he thought New York was a nightmare when initially visiting, Kevin was still filled with wonder when he first moved here. Does he have a master plan for his career or does he just take things as they come? As Louis wades through questions related to career goals, he also finds that for Kevin, the creative process is all about collaboration.

They back up to talk once again about Kevin's improv beginnings at Dads Garage in Atlanta and what the scene was like down there. We find out that, similar to Episode #60's guest T.J. Mannix, Kevin was a graveyard-shift college radio DJ! Louis asks about Kevin & Jimmys Guide To New York and they discuss the awkwardness of doing comedy with the public. Where do Kevins comedic sensibilities come from and what's he usually going for? Kevin answers these questions and talks about working with long-time buds Jimmy OConnell and Al King.

Kevin has done two stints with Second City cruise line casts and so he and Louis get into what that life is like. Most recently, Kevin was doing 11 shows a week, which was far more intense than his first time around. The busier schedule was more enjoyable, he says. Louis wants to know what was the difference Kevin saw between his two experiences and they discuss the advice of, You gotta be good even when youre not. Plus, so much is explained when we find out that Louis loves the Kardashians.

One thing is made clear, and that's that Second City knows how to build a sketch show. Gaining such professional experience has helped Kevin become comfortable as a sketch director here at Magnet, where he has directed Wendigo and The Executives. Hear about Kevin's approach to directing sketch and how he focuses on keeping a show moving.

Enjoy all of this, plus, we discover how far into his own future Kevin can see and we hear him speak briefly about his experiences writing for Sesame Street! Go Panthers!!!