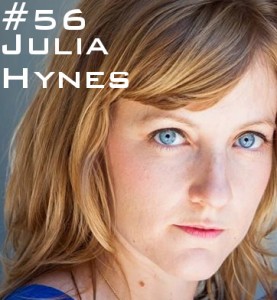 On this week's episode of the podcast, we've got Julia Hynes who performs with Junior Varsity, The Stank, and Sad Kids. A founding member of long-running Megawatt team, BRICK, Julia talks to host Louis Kornfeld about her improv development, being "good at school," and the freedom of improvising with an all-female team. We're taking next week off, so we've made sure this one will tide you over!

Louis begins this interview by asking Julia about what it's like to go from forming and being on BRICK for four years to joining a very established team in Junior Varsity (JV). One of the amusing things, she notes, is stepping into JV's established ways of communicating with each other. Group email threads aside, Louis wants to know about Julia's own differences in play between the two teams. She says that on BRICK she was a big editor and now with JV, shes not as concerned with that task. Julia also describes a big improv lesson that came during her early days of BRICK which she has always kept in mind: Remember to make it feel honest and real.

Between the end of BRICK and when she joined JV, Julia was able to take some time off from performing on a weekly show. Louis talks to her about how nice it was to have the chance to get away from the theater for a bit. She's a full time school teacher, so the additional time in her evening schedule was appreciated, as was the ability to step away from the pressures that can exist at a theater. Between her own shows and those of her husband, Nick Kanellis, it was starting to feel like she had to be at the theater all of the time. Since coming back to a weekly show,  she says that its really on her terms that shes there and, of course, it helps to be doing a show that shes proud of.

Julia's interest in improv began in college at Penn State, but she initially pursued academia after graduating. Eventually, she moved to NYC because a lot of her Penn State comedy friends were living there and doing improv at UCB. On a recommendation from a friend, she ended up taking Level 1 at Magnet with Tara Copeland and loved it. As a student, Julia says that she didnt go to many shows initially because she was intimidated. It wasn't until around Level 4, when she met some future members of BRICK, that she began to get more fully involved in the community. To that end, Louis asks her about how long it took to settle into "being an improviser" and declaring that as an identity. Though she said that was tough at first, because she knew other improvisers who had been doing it longer and perhaps took it more seriously, she eventually got over that fear of judgement.

Julia says she's at a stage in her life where shes evaluating, What do I actually want and why do I want it? This leads Louis to discuss finally facing our mortality after the age of 30 and how that change from "I've got plenty of time" to "time is running out" feels. Life is already happening, he says, which seems to cause him alternating feelings of crippling anxiety and a cool calm sense of acceptance.

Speaking of "who she is," Julia is a full-time English as a Second Language 5th Grade Specialist in New York City who just finished her 8th year of teaching. Since high school, she was someone who wanted to make a difference in some way. Initially, went into Womens Studies and felt she could make a difference through that field in the world of academia, but then found the cracks in that plan and decided to be a teacher in NYC. Since making the change, Julia feels like shes making a bigger difference, especially in the last year, during which she feels she really started to come into her own as a teacher. Louis nearly shares the zen parable of the empty cup and also horribly misquotes Joe Bill, saying, in improv any class "...there are givers, takers, and prove-ers." Everyone agrees that it much more difficult to teach the prove-ers.

Speaking more about teaching and class, Julia claims that she's always been "good at school," which is something that Louis has never really heard. For Louis, in adolescence, school became the straight man that he played against and he found it difficult to excel. As opposed to Louis' oppositional experience, Julia says she had a good rapport with teachers and a family who encouraged her to take school seriously. And though she admits that she was not good at science, which she avoided, the rest just came easy to her. Louis goes further, saying that he had an aggressively contrarian approach to school, but Julia didnt start feeling like that at all until college. They discuss the importance of having teachers that check in with you and care about teaching. They then talk about Julia's own teaching methods and how she's had to add more structure to her practices over the years and be less chilled-out than when she first started. What does it take to control a room of 5th graders? She enjoys finding the balance between making the kids laugh and having them get down to business.

Louis just has to ask, do Julia and Nick go to the zoo and look at animals together? For those of you who don't watch Trike frequently, Nick Kanellis is really into animals and animal behavior.

Circling back to this idea of being surrounded by guys who quickly identified as comedians, Louis wants to know how that has influenced her, especially in an improv world that still has a male majority? While she was comfortable always being the one girl hanging out with the comedy guys in college, she says that it felt good having female teachers at Magnet and then being put on BRICK with strong female players Amie Roe and Fiona Bradford. Many of the improv moments that have felt the best, she says, have been a lot of the all-female shows that shes gotten to do, like We Might Just Kiss, which brings together women of all skill levels to play with each other. Julia finds it very hard to explain the feeling when, on a nearly all-male cast, something she says isnt given the space she hopes for. The feeling of ownership of the stage is just very different with gender taken out of the equation. Louis admits that maybe cast diversity can hamper group mind.

Louis tries to avoid asking about the difference between playing with an all-female show versus a mixed-cast show, but he asks anyway! Julia says that the biggest difference is, Whatever I say is going to be just embraced in a way that is beyond what happens normally. She also credits the women she plays with. On her duo Sad Kids, she notes that partner Beth Newell has a way of molding whatever Julia says into a beautiful game. On The Stank, they're all seasoned improvisers, strong players, positively minded, and nonjudgemental  all of which goes a long ways. Julia goes further to says that, even when the men on a team are great, theres just something there that doesnt quite feel the same. Theres a added sense of pressure to be the token female, which then can inhibit how she plays. There's a feeling as if she has to represent for all women. Relieving that pressure opens up more freedom of play.

Finally, Louis and Julia discuss playing real people from their lives and pantomiming objects that they actually own in order to make scenes feel more real to them. Louis is really taken with the idea of the original improvised theater companies, which viewed improv as an opportunity to show people what we know and who we are. The people performing are the people creating the art, so it showcases them in a way that other formats maybe cant. He finds it exhausting simply to engineer comedy night in and night out without getting to be himself.

But really, finally, Louis asks the hard-hitting question: How cuddly is Nick Kanellis???