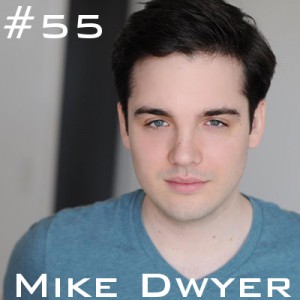 Magnet instructor, writer, and performer, MIKE DWYER, takes a few minutes out of his comedy-making schedule to talk with host Louis Kornfeld about simplifying improv scenes, the difference between talent and skill, and how he missed the point of film school. These two gentlemen find that they have remarkably similar paths to becoming comedians and relate over their experiences studying with Rebecca Drysdale. You can catch Mike performing with The Wrath and Friday Night Sh*w at Magnet and Southpaw at UCBeast.

Louis kicks off our interview by referencing a recent show of Mike's with The Wrath. He describes a quintessential Mike Dwyer move, which is characterized by very quickly finding an opportunity that others might miss and then using it to crack a scene wide open. Louis wants to know how Mike is able to be such a lightning fast player and more specifically, how he's able to take on points of view so quickly. Though Mike thinks that his process is more patchwork than precision, he says that he approaches scenes knowing that his characters are doing what they do on purpose, which leads quickly to POV. He certainly doesnt think of it as, Better have an answer real fast.

Despite his patchwork approach, Mike tells us that he does have conscious goals, and currently, he is working on making scenes be as simple as possible, even dumb, if they have to be. There should be no over-complicating a scene, which happens very often in group scenes. Mike says that it comes from a feeling of wanting to add your own thing, but that it's liberating to know that everything you need is already there. Louis thinks maybe the over-complication comes from AND-ing too hard and that people botch the YES too often. Mike and Louis get into the difference between passively accepting offers versus enthusiastically accepting them and agree that you dont have to add things to every single moment of the scene. Mike likens new improvisers to goldfish in a loving analogy.

Flattering him once again, Louis says that Mike is an incredibly good game-based improviser  so, whats his approach to finding games in scenes? Perhaps surprisingly, Mike thinks that game is merely a result of good improv, so hes usually not thinking hard about it. He trusts that his training has worked and instinct will lead him down the right path, so that he can find himself in a place of flow. Louis offers two rival takes on how we learn game as improvisers: You have conscious thought and effort, but you can also absorb a lot of that skill by being around it all the time.

What ticks off Louis in class? When people don't want to do the hard work it takes to gain skills. Both improvisers agree that coasting through your improv education isnt going to end very well for you and it isnt very fulfilling. They examine the difference between skill and talent, noting that no matter how much talent someone has, they've got to keep developing their skill in order to feel satisfied. Mike finds the skills that hes acquired to be more interesting than any talents he may have held innately.

Whats the highest compliment Mike could get about a show? That it was funny, duh. Louis talks about the roots of funny" being a dirty word in improv. Maybe believing in dont be funny is only really important early on in an education and scene? Mike concurs, saying there needs to be a set up in order to have a punchline. Improv scenes are like inside jokes and Harold is a sophisticated form of hanging out with your friends at the bar. Often, when people start getting decent at improv, they focus too much on the unusual thing and forget about the boring stuff. Mike describes a phenomenon regarding going back and forth between the unusual thing and the base reality. The mundane things in our scenes make the ridiculous stuff digestible. Louis prods everyone to look up Norm McDonald's "The Moth" joke from CONAN. Spoiler alert: It's great.

Although Mike spends nearly all of his time doing or teaching comedy these days, he started out as a film student at NYU's Tisch School of the Arts. Louis had the exact same path, he says. He talks to Louis about his writing partner and best buddy from high school and how they took themselves very seriously. Comedies, interestingly enough, were never a focal point until later on when they finally attempted to write one. In fact, he first took an improv class simply because he wanted some basic comedy training. In film school, Mike thought of himself as very serious and very lazy. He'd always loved comedy, but had no pretense about being a part of it. Because of his perceived laziness, Mike thinks that perhaps he missed the point of film school at the time. Louis and Mike have strikingly similar backstories, including the fact that they were both great illustrators at the age of 12. For both of them, realizing that comedy was going to be the central thing in their life was a very slow process.

Since it wasn't immediate, Louis asks Mike when it was that he began taking improv seriously. When he felt competitive about it, Mike says. He shares an an eye opening experience from a Rebecca Drysdale class that came directly from listening. Louis says that he also had a breakthrough moment in a Drysdale class and they discuss for a bit what it was like to study with her.

Mike teaches Level 3 now, so Louis wants to know  what's he focusing on? Coming back to some earlier points, Mike says that he focuses on keeping scenes simple, committing to the mundane, respecting each others' ideas, and getting enthusiastic about what your scene partner is doing. These two teachers discuss how to encourage people to be enthusiastic without planting a fake enthusiasm in them. He also shares a note that stuck with him: Always have a sense of mischief. The rules of polite society are exactly the things we look to avoid in improv. This is something The Wrath is very good at, Louis claims. But they've been together for years, so what can less experienced groups do to instill that sense of troublemaking? Mike shares a fun exercise in that pursuit and clarifies what we mean when we say, "Everything you need in a scene is already there."

Louis claims that improvisers look younger than everybody else and quotes Magnet founder Armando Diaz, saying, The trick to improvising is to do just enough to not get fired. If that doesn't get you excited for this episode, I don't know what will.