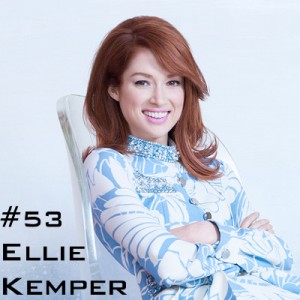 This week, the delightful Ellie Kemper takes a quick break from making TV & movies to talk with us about positivity in comedy, Unbreakable Kimmy Schmidt, and of course, improv! In the midst of hosting the TODAY show last week, and performing at Magnet with Christina Gausas (as KempSas), Ellie was kind enough to sit down with our lovable host Louis Kornfeld for a brief interview.

Louis wastes no time getting into it, asking Ellie, "How do you make positivity so funny?" Ellie admits that there is a a fine line between grating and funny when it comes to positivity. And though many positive characters have a naiveté to them, she maintains that you can bring more to those characters than simply ditziness. Louis believes that earlier improvisers shy away from being positive because it feels like theres not much fuel to burn, yet he observes that Ellie is able to keep positive characters going endlessly. Perhaps it's a psychological reflection of the performer?

Continuing in this vein, Ellie talks about her one-person UCB show centered around a cheery airline attendant who is falling apart on the inside, which of course brings us to Kimmy Schmidt. On Unbreakable Kimmy Schmidt, all of the characters, and particularly Kimmy, maintain a very upbeat disposition despite the darkness that seems to exist just offscreen or looming right behind them. Why are they able to stay funny? Probably because they all make good on the show's motto: Youre stronger than you think.

In an improv scene, what makes one dark character entertaining to watch and another just sad? Both Ellie and Louis agree that confidence goes a long way and gives the audience faith in the actors trying to pull it off. Ellie talks specifically about how Christina Gausass confidence puts her at ease when they play together. The focus that Christina gives her scene partners takes their stress away and let's them know they're being taken seriously. Ellie and Louis both feel that anytime you have to sell what youre doing to the audience, it puts a stress on the scene. A great strength of an improviser is to simply "be here right now."

Louis then wants to talk about relaxation. How does Ellie deal with the difference in scale between the pressures of earlier performances and auditions, and the types of high-profile projects she does now? Interestingly, Ellie has actually gotten more anxious as time has gone on and, despite her prowess on stage, is still mystified by how other performers improvise so well. Louis digs deeper, asking Ellie if being famous has changed what its like to improvise in front of people. She says that audiences will laugh at things that arent really very funny and that you run the risk of becoming a lazy improviser. She's returned to improvising more regularly this past winter after being away from it for some time, and though she felt rusty at first, she's been loving it.

Louis favorite shows are the ones where he knows it was great improv but the audience was lukewarm about it - the pride of content over response. But that pride doesn't prevent even great performers from going for the response sometimes. Ellie and Louis discuss the terrible feelings associated with making an easy joke in a scene. Guilt keeps you honest.

For his concluding question, Louis asks Ellie to describe what it's like to come from the grungy, DIY world of NYC improv and sketch, and now, to be working amongst the most successful, absolute best people in comedy. Her answer is simple and reassuring. They're all cut from the same cloth, right? Hear her answer to that question and all the others on this week's episode. We know it's a short one, but we swear on the skull of Del Close that it's packed full of great stuff.