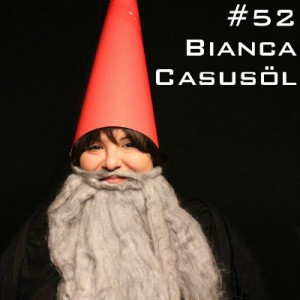 Beloved Magnet Theater alumnae, Bianca Casusöl, visits from North Carolina to talk about her improv origins, making adjustments for shows, and the weird games she plays all alone in her head. Currently a performer and instructor at Dirty South Comedy Theater (dsi) in Chapel Hill, NC,  Bianca spent several years in New York performing at the Magnet on shows such as Megawatt, Kiss*Punch*Poem, and Whiskey Tango Foxtrot. Fortunately, we caught her while she was in town and convinced her to catch up with her old pal Louis Kornfeld on our podcast.

The conversation appropriately begins with our two stars talking about dropping back into a community after being away from it. Though they both claim to do a poor job at keeping in touch with people, Louis insists that Bianca has an ability to open people up and make them feel like a million bucks no matter how long she's known them or how long it's been since they've spoken. Has she always been that way? They talk about their birth orders and what that might have to do with their adult personalities.

Bianca started at Magnet on Jan 9, 2010, but she first got into improv at her NC high school with Viola Spolin's theater games. She had a less than amazing experience with a practice group before taking a long break from the art form. When she eventually picked it up again at Magnet, she says she felt like the kid sister who was always just hanging around, which meant that she got to know the house managers quite well. In contrast to Bianca's natural ability to make friends with strangers, Louis recently took a personality test and related deeply to a question about being a wallflower.

Catching us up on her current home, Bianca talks about the improv scene in North Carolina and how dsi has grown by leaps and bounds since she first came into contact with it. One major difference, compared to the NYC theaters, is that dsi does both short form and long form improv. This creates a pressure to perform for and entertain different kinds of audiences, even families with children. Before continuing, Bianca says a really uncomfortable word, but then the two of them talk in detail about making adjustments for various audiences and Bianca claims that manners are just shorthand for respect. We like that phrasing a lot.

On a related note, Louis talks about how easily impressed certain audiences are and that we lose out by judging them for liking what they like. He says that those of us in the comedy world are spoiled because were surrounded by people who let us be weird and indulge our ideas, but that many people (kids in particular) dont have that luxury. This is why they delight in something as simple as an improviser using their suggestion in a scene.

Bianca reveals to us that when people arent nice to her, she thinks theyre trying to sleep with her. Louis claims that she has a gift for playing uncomfortable moments in scenes and Bianca chalks a lot of her improv skill up to expressing a lot of feelings on stage and her love of exploring "the weirdos." Plus, she tells us about the strange games she plays in her head, like "Who is dreaming up the people in the world?" and "What would this person be if they were a beverage?"

Check out this week's episode for a really fun conversation about all of the above and more. And if you don't, well then just remember that kids deserve respect too.