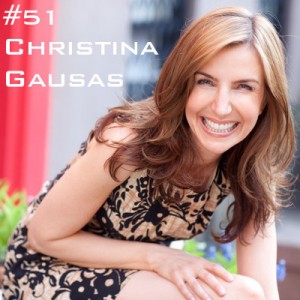 We welcome a national treasure of the improv comedy world, Christina Gausas, into our studio for a conversation about ensemble support, form development, Del Close, improv notes, and wanting your scene partner. Still basking in that post-DCM glow, Christina begins her conversation with host Louis Kornfeld recapping her DCM, talking about the support of the ensemble, and being in the moment.

Louis brings up the difference between bragging and acknowledging you've had a great show. Christina says that bragging feels counterintuitive because the whole thing relies on ensemble. Without the rest of the team, the hilarious line you delivered would have never happened. In the same vein, they discuss the difference between a real gift and a "bailout" gift and the two parts to every improv gift: the giving and receiving.

Following dual admissions of performance anxiety, Christina and Louis talk about some of Christina's Chicago teams and how they went about developing new forms. Both agree though, that content  great scenework  comes before any concern about which form a team chooses. Christina's advice? Create something that is your own and put the work into it. Also, explore the intention behind a show.

Christina indulges Louis' request and shares some fond memories of the late, great Del Close. He was an artist who valued authenticity, creating complete characters, and not being topical simply for the sake of being topical. He wanted people to find the universal implications behind the suggestion, to not be literal with it but be expansive with it. While many might bring up Del because they really love discussing the rebellious and outlandish aspects of his life, Louis says that he most likes the idea that Del pushed people to go beyond their limits. Plus it's possible that he was the Forrest Gump of the improv world. Don't believe us? You'll have to listen.

Inspired by Del's approach to notes, Christina and Louis talk about the use of direct notes and how they can be useful or harmful. Both maintain that players need to develop the habit of taking notes easily. Louis pitches his idea that an improv team should approach the craft with a smart mob mentality and Christina tells us how great acting integrates with great improv. Finally, hear about Christina's most recent revelation that people should truly want their scene partners at all times.

This is a great episode featuring one of the game's very best players, so we recommend you turn the volume up to 11.