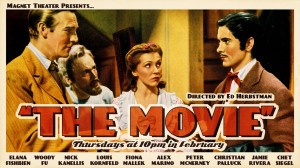 Growing up it was a bi-monthly event in my family.  We'd drive 45 minutes to the nearest movie theater, go out for Chinese Food and then go see something.  Something big.   But starting this Thursday my bi-monthly childhood treat will become a weekly one...

"The Movie" is coming to Magnet Theater!  This improvised long form will leave you a bit breathless.  It's an entire improvised film, complete with cuts, pans, zooms, helicopter shots, and maybe even some prohibitively expensive CGI.  And if we're lucky, we may get some Chinese Food before (but probably not).

It might be a heart-warming coming of age picture, or a tear-jerking sports hero battling cancer sort of thing.  Or maybe a sci-fi horror 'stuck on a planet battling a monster (but the real monster is their own inner demon)' sort of movie.  Maybe a combo of all three.  Doesn't matter though.  I'll be there.

Oh, and it's part of Thursday Night Out - you get to see the whole night of shows for one $7 ticket.