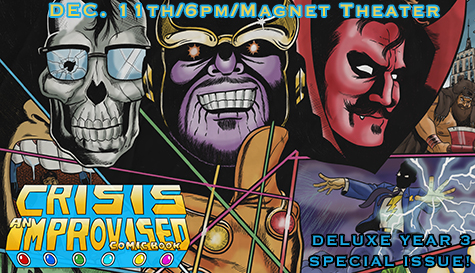 Your either die a hero, or live long enough to see yourself become the villain in an improv comedy show.

For two years, CRISIS: AN IMPROVISED COMIC BOOK has astounded audiences with spontaneous spectacles of hilarity and heroism. Now CRISIS pays tribute to the "terrible twos" with an event of evil dedicated to the the diabolic. This antagonistic anniversary begins with the improvised vile rise of a never-before-seen ne'er-do-well. Then the comic book comedians of CRISIS invites fellow funny fans of fiendishness to play villains from past shows who welcome this new wicked wrongdoer among their sinister circle in the most malevolent monoscene ever seen!