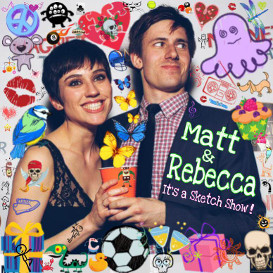 Matt Antonucci & Rebecca Robles have two cats, one is named Gertie and the other is named Olive. They love them. Rebecca has tried everything in her power to put them in this sketch show but Matt won?t let her. Rebecca gets upset by this, but understands the difficulty of transporting two cats from Brooklyn to Manhattan, especially for a comedy show.

Unfortunately, this show has nothing to do with those cats. It?s just easier to talk about two lovely cats instead of a sassy description of what we think of ourselves. This is a sketch show featuring material written by Rebecca Robles and Matt Antonucci. We hope you enjoy it.