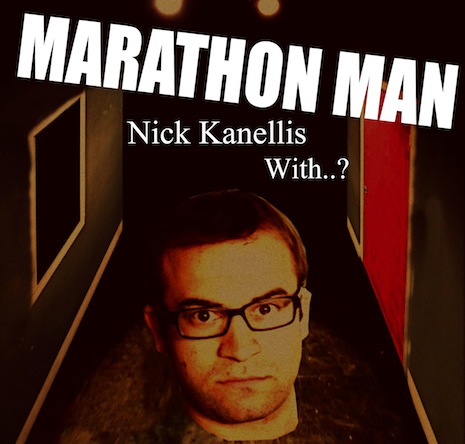 Nick Kanellis came from the most polite neighborhood in Iowa City. Nick Kanellis is self effacing and kind. If Nick Kanellis ran in the Iowa Caucus he would win handily. This means nothing to MARATHON MAN. MARATHON MAN needs solutions. Can Nick Kanellis offer up anything but whimpers when faced with mystery scene partners? Can Nick Kanellis maintain his facade of sweetness as improv horror is heaped upon him. Will Nick Kanellis withstand the white hot torture of a random audience member playing a scene with him? After MARATHON MAN, will Nick forgo small talk with strangers and stop waving to people who seem nice? The fate of our very Nation may depend on your attendance. $2 PBR and a man taken to the edge. MARATHON MAN.