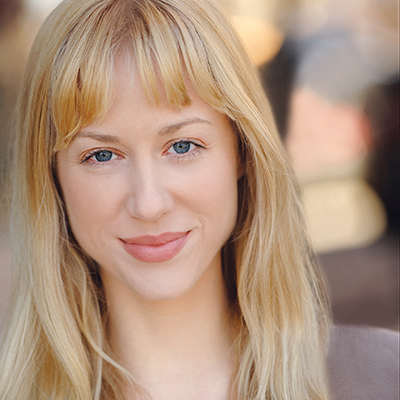 Dorothy McMillan is a versatile actor and voice-over artist who began her performing arts career in dance. When she was just three years old, she saw "The Nutcracker", performed by North Carolina Dance Theatre (now called the Charlotte Ballet). During the production, she could barely sit still in her seat and danced down the aisles during intermission. Her joy of movement led to 22 years of dancing ballet and modern, studying and performing with reputable schools and companies (such as the Charlotte Ballet, North Carolina School of the Arts, and the Joffrey Ballet School).

At 16, Dorothy began studying at Northwest School of the Arts, a diverse and welcoming community that supported her rigorous dance training and awakened her passion for acting. She began performing in school musicals and plays while maintaining her dance career. Dot inevitably got her B.A. Degree in Theatre and Dance from UNCC and also trained at Marymount Manhattan College.

Favorite roles include playing Sylvia (a lovable dog) in A.R. Gurney's "Sylvia", Marcelle Cot (an unsatisfied wife) in "Hotel Paradiso", and Kathleen (a pragmatic prostitute) in Toni Press-Coffman's award-winning play, "Touch". You can hear her voice in the Blue Man Group's Las Vegas show and third studio album "Three", as well as several commercials. She is currently taking the Level Five: Intro to the Conservatory class with Peter McNerney at The Magnet Theater Training Center and loving it!