Getting to Know: Janelle Bentley 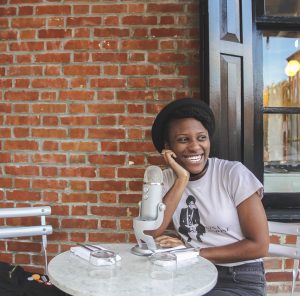 I had friends who did it in college, and I really wanted to do it too. I was pretty nervous about it, so instead, I was involved in a tv sketch show. After I graduated I decided that I wanted to give improv a shot. One of my graduation gifts was an improv class at Magent Theater and that’s where it all began. And look at me now, two and half years later and still in love with improv.

I’ve been performing for awhile, I’ve done a few musicals and plays in high school and college. And, I was on a sketch tv show in college. Aww, the good ole days!

ISSA RAE she is so honest and fun! (And my big sister obviously, she just doesn’t know it)

Tiffany Haddish, she is so great! She makes me laugh so much. Everything she says is so outrageously funny (imo).

Hehe awkward moments....they make me cringe, but I feel so deeply for the other person/or just a situation I could be in and I will just start nervously laughing.

Mmm any album of Ingrid Michaelson, she is the best! Or funky beats from Vulfpeck.

What is your favorite restaurant?

Having fun all over the town!!!

What's the worst school mascot you ever had?