Getting to Know: Lauren Stripling 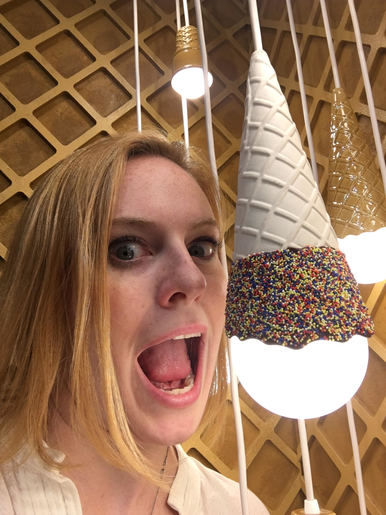 Pyros, on Tuesdays at Musical Megawatt.

Fort Worth, Texas, which is its own city and not just "part of Dallas," I swear!

I've been a Story Pirate for about 9 years, and so have been surrounded by comedians from the Magnet forever. Then, about 4 and a half years ago I went to see a musical level 1 class show that my friend Louie Pearlman was big sibbing, and I thought it was absolute magic. I signed up for musical level 1 the next day.

The first musical I was ever in was when I was 3 and played Mrs. Duncan in an adaptation of "Sylvester and the Magic Pebble." Even then I was playing moms. Toddler typecasting! I mostly was a music kid growing up, and played the harp at people's events during middle and high school. Then I really got into theater in high school because we had a phenomenal teacher (shoutout to Mr. Moore) who would do this sort of experimental theater stuff with us with a lot of movement and devising.

Jemaine Clement from Flight of the Conchords.

I love doing accents. I'd love to do a Downton Abbey Maggie Smith or a show where Amélie is old but still an ingenue and nobody indulges her any more.

When highbrow and lowbrow get smashed together. Absurdism. I love seeing a genius fall on their face.

What book they're currently reading.

Doing an escape room or having a board game and wine party.

If you were in a circus, what job would you want?