Q&A: The Saga with the cast of Saga

Has your life been noticeably un-legendary lately? Are you craving an adventure beyond your wildest dreams? Then The Saga is the show for you--and we chatted with the cast to let you in on the influences behind the epic show! 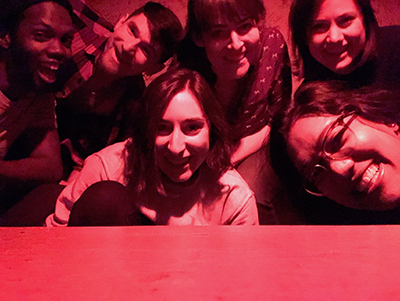 What can people look forward to seeing if they come to watch The Saga?

Randy McKay: Three or more stories in which the through line that connects them deals with an element of the extraordinary and the effect that has not only on an individual and the world in the "moment" but also in generations past and future. Also entertaining object work.

Parmita Samanta: It's like sitting in your grandma's kitchen and having them tell a story and then a million family members interrupt it to correct something or add their perspective.

What influences does the show draw on?

Nolan Constantino: From The Epic of Gilgamesh to Jaden Smith's tweets and everything in between.

Josh Cohen: You're sitting on a fallen tree trunk. The breeze blows gently. The light shimmers through the woods. A faint rustling as a black bear appears. She moves towards you, timid but curious, almost bashful. You look into her eyes and you see: for all the horrors and confusions in the world, there can be tranquility, there can be peace, the kind of peace you can only call spiritual, that gives life vibrance and meaning. You offer the black bear cashews from your hand. She takes them, gently. Life finds a way, you think. You remember young Jeff Goldblum, and you smile. The Saga draws on this, and stuff from books.

Alessandra Calderín: It's the very essence of our being. The original art form. The ways of old. The tales our ancestors told to make sense of the world. The foremost justifications. It's the core of us. The archetypal fibers of humanity. Isn't that what we're trying to get to at the core of improv? To lose ourself so deeply and allow our unconscious to pull forth and built with one another a story that's woven from the very thread of the collective? Besides, you know, making jokes and stuff.

Exactly how epic is the show?

Parker Phinney: Picture an open field. Now picture it covered in snow. No wait, the snow is just very very tiny diamonds. Now there's a giant tree-person taller than Mount Everest marching towards the field, humming the latest Kanye West thing. No, there's more than one. Hundreds. Quick! Turn around. It's your whole family. Now they're fading into nothing before your eyes. You reach out a hand. You have a hoof. You're a centaur. Millions of fairies swoop in like locusts, shrieking the latest Kanye West thing. The camera zooms out--field, continent, planet, solar system, galaxy. The Saga is at least twice as epic as that.

If you were a character from any sci-fi/fantasy/mythological story, who would you be?

Amanda Corday: As far as fantastical characters go, I’m big on Frodo Baggins. I like to bring his essence with me onto the stage for Saga, and all improv really.

Jana Heaton: My second screen name was “Gollumslover4evrm” and I feel it very much is still the case. #4evrIs4evr.

Experience the extraordinary at The Saga, Monday February 19 at 7:30! 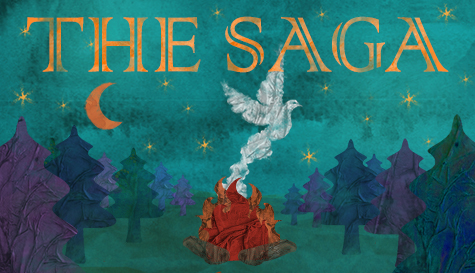